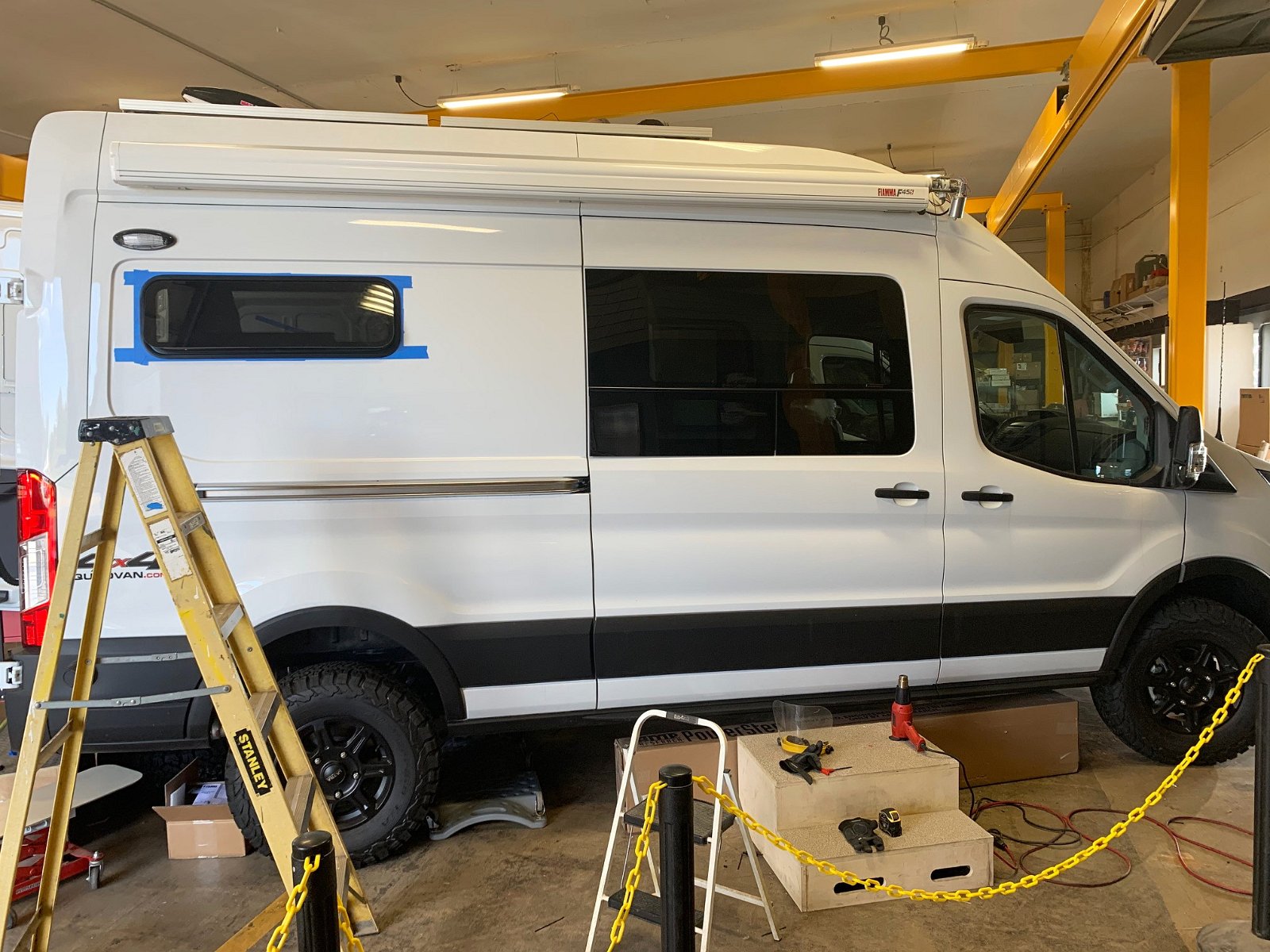 Conversion of this Ford Transit van into a super-cool 4×4 campervan (aka, the Traveling Cat Adventure Van II) is now finally really making progress after several delays, most notably the shutdowns for Covid-19.

It was a year ago, last July, that I ordered the van and set things in motion.  I wasn’t able to find a Transit van anywhere that wasn’t either completely bare bones or loaded with every option – including glass in the rear doors and dark paint that I didn’t want, both which would make the van less comfortable in hot and sunny climates.  So I had to order from the factory.  I was able to finally pick it up last December and pass it off to QuadVan for the 4×4 conversion part, including upgraded suspension, locking differential, raised shock mounts and all terrain tires.  (More details here.)

Van Haus is doing the actual campervan conversion and we worked out a mostly final design layout in January.  I was originally excited about doing a build like this one where there was enough storage for the bikes inside the van under the bed but still room for a wonderful dinette seating area situated mid-cabin.  The platform for a queen-size sleeping area would extend out over the dinette area.  However, given all the gear we like to carry on our adventures (mountain bikes plus gear, two-person inflatable kayak plus gear, telescope and camera gear, folding chairs, portable grill, etc.) plus room for the cats’ litter box and feeding area… well, it seemed pretty clear we needed to dedicate more room to the “garage” by doing a common fixed platform bed.  Plus the queen-sized bed needs to be oriented lengthwise since I can’t fit width-wise between the walls of a van, even with those side extrusions some people put in.  So here’s the final design.  Plus, now there’s room for a full cat apartment under the bed platform. 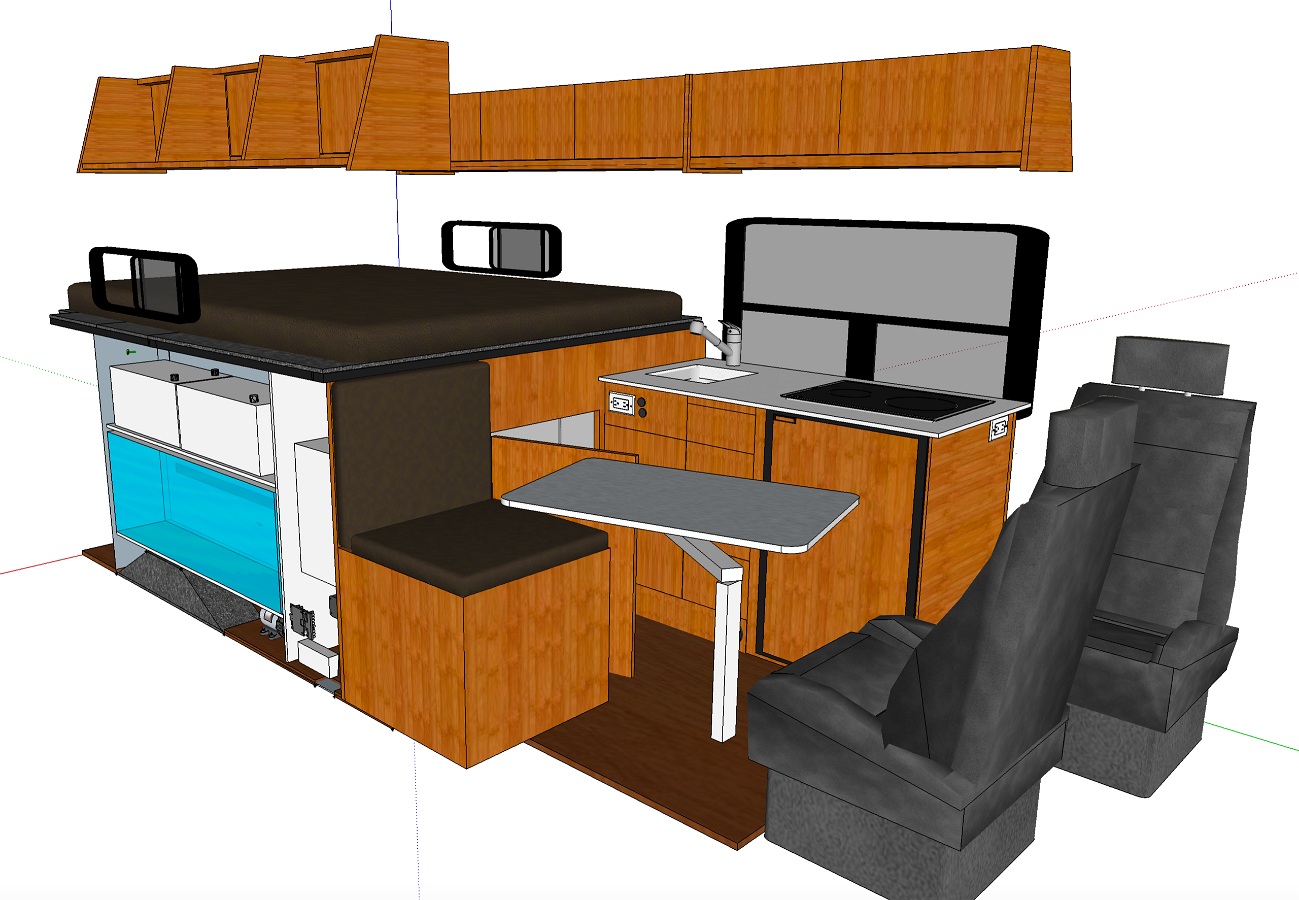 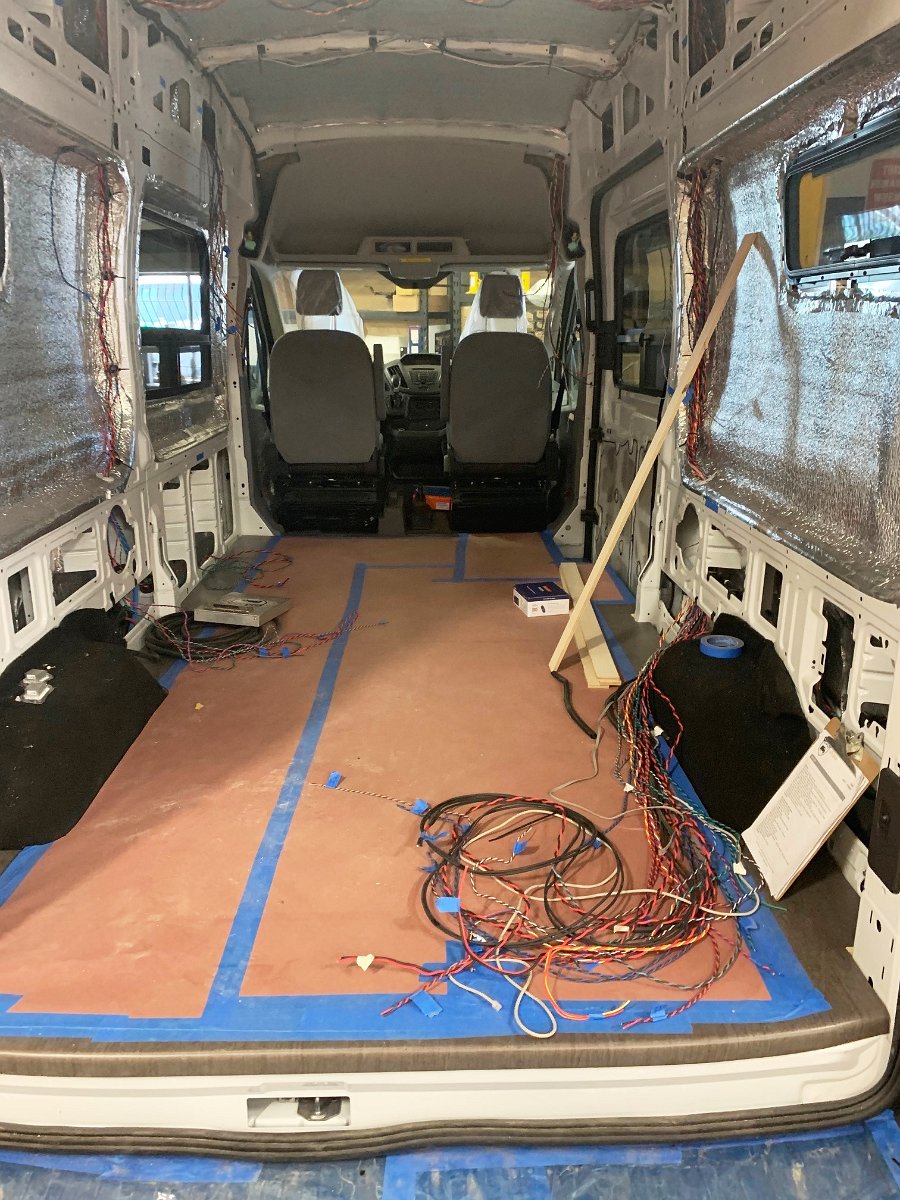 Due to scheduling and miscommunication mishaps, the van didn’t actually get over to Van Haus until late-February and then didn’t really get started before everyone went into shelter-at-home mode in response to the Covid-19 pandemic.\

At the end of May, Van Haus was able to start work again, albeit at a much slower pace with social distancing safety measures in place.  I already sold the original Traveling Cat Adventure Vehicle in late May and now Darlene and I eagerly await completion of the van conversion, hopefully in August sometime.

As of late June, they’ve installed the front side windows and the little bunk windows over the sleeping area, the powered Fiamma awning w/LED light kit, the 500W of solar panels on the roof, the MaxxAir fan at the rear of the roof, the Amp Research powered steps on both driver and passenger sides, the various external ports (120V, 12V, aux solar, shore power, etc), my two little cellular booster antennas and the swivel seats in the cabin area.

As of early July, they’ve now installed the floor, all the wiring runs, the infrastructure for the upper cabinets, ceiling insulation and initial wall insulation, and the bug screen.  They’re now in the process of making the wall panels and when those are done the full wall insulation will go in.

Mid-July now, and the wall insulation is finished and the wall panels are in.  They’re starting work on the cabinet parts using a CNC machine:

It’s late July now and the cabinets are coming together and they’re building the aluminum bed frame.  They also tried squeezing my spare oversize tire underneath the rear of the van but then convinced me to go with getting a tire carrier for the rear door (from Aluminess). 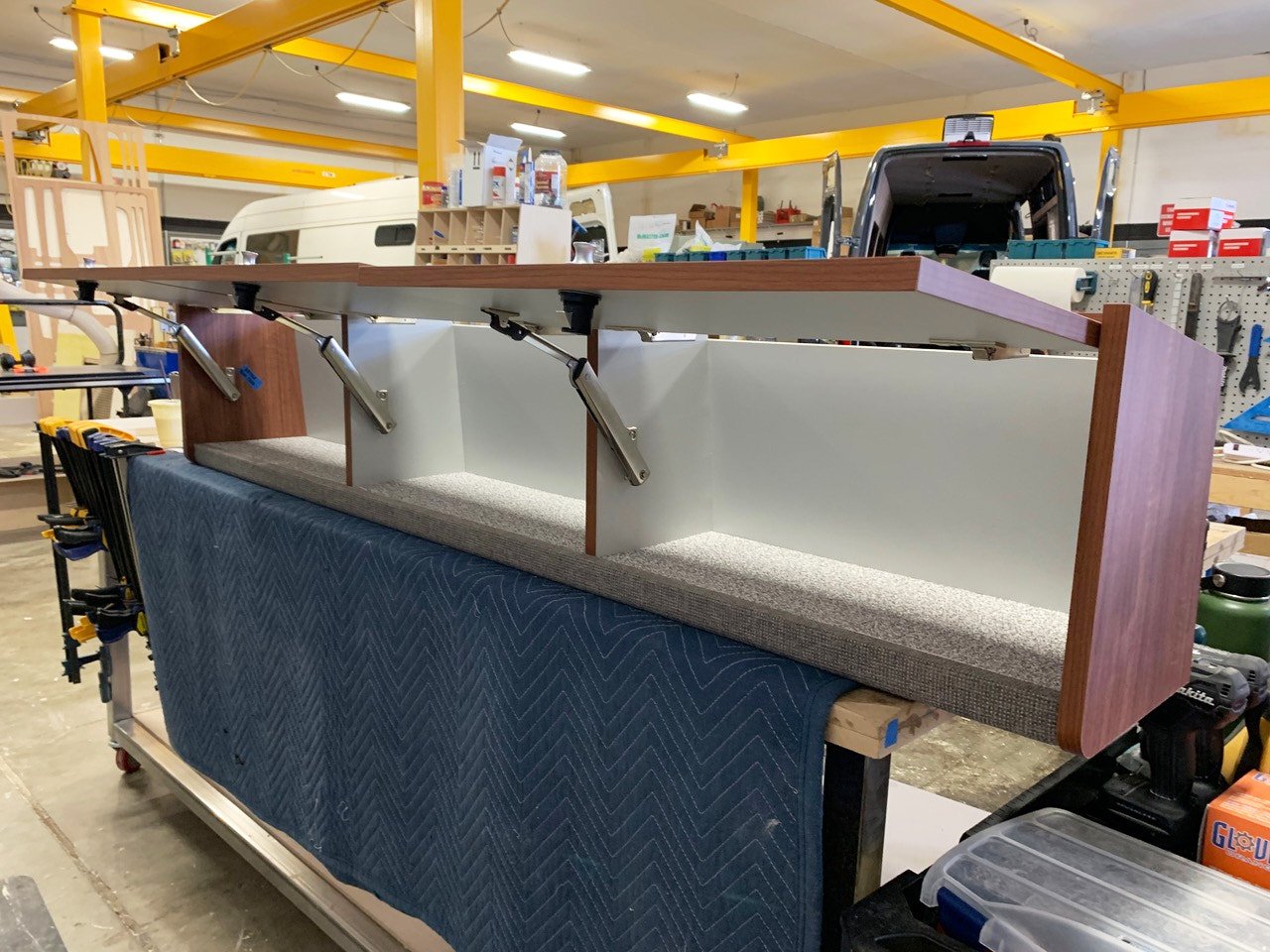 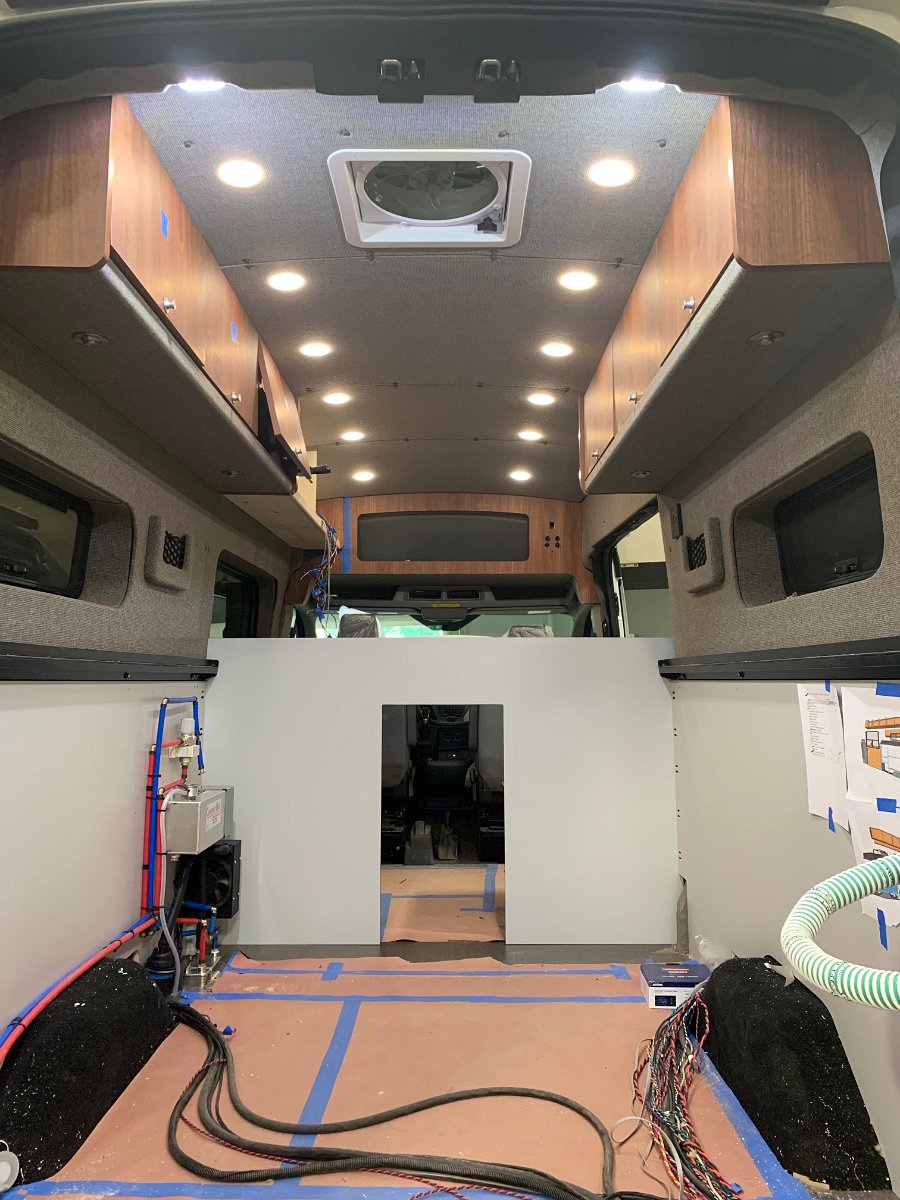 Early August and now some of the overhead cabinets are installed, plus the bench seat (which hides the toilet) and the Rixen heat/hot water system.  The electrical components (inverter, fuse box, battery system) and other plumbing will be going in soon.  They’re estimating another two weeks of work.

Well, early September now and the van build is complete… except we’re waiting on the spare tire carrier for the rear door from Aluminess.  With luck it will actually arrive at Van Haus by Sept. 14th or so and we’ll be able to drive up there and take delivery of the van later that same week.  Fingers crossed – it’s been 14 months since I started this whole process!

Hi,
Can you tell me about your experience working with Van Haus? I’m considering a build with them. Would you recommend them?
Thanks,
Randall

Yes, very easy to recommend Van Haus. Erik was great to work with, they’re very willing to accommodate various customizations, and they show great craftsmanship. You can read more about my build on my Tips and Details page: https://crimdom.net/transit-van-conversion-tips-and-details/

I’ve been meaning to put together a little list of things I would suggest they do differently, at least for my particular build, but I wouldn’t have any qualms about asking them to do a build again in the future.

I just noticed this but thanks for the reply. I have a deposit down with Erik. After ordering a 2022 van from Ford that never got built and re-ordering it as a 2023, I finally have a VIN from Ford. So it looks like I may get a van after all. I clicked on your link above and the build looks like it came out very nice. I love the theatre set up. I may end up asking for more info on that.
Best,
Randall

Congrats on your van getting started! Strangely, my van may be getting rebuilt by Van Haus at the same time yours is getting built. It was rear-ended last year by a reckless young driver and had to be completely stripped/unbuilt to go to the body shop, where it is now. Then it goes back to Van Haus to be rebuilt.
https://crimdom.net/2022/09/van-smashed/