It’s that time again: upgrade time! I’ve moved to a new home in Santa Cruz and I now have the wall space to do a super widescreen (2.4 by 1) in a Constant Image Height (CIH) setup and do it big: 12 feet wide by 5 feet tall!  Sweet!  And I’ll give 3D a try too with the JVC DLA-RS55.  (My last “home theater rebuild” was going high definition back in 2007 in the loft of my condo in San Jose.)

So here’s a photo journal of the building out of my home theater in my new home in Santa Cruz, starting with the the “before” and “after” shots: 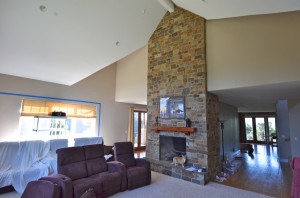 I’ve never been a fan of the separate, formal living room — the one you rarely use as it’s supposedly only for “entertaining” — because of course you always tend to gather near the kitchen.  Anyway, I much prefer “great room” designs.  So this somewhat separate living area was destined to be converted to my home theater space.  It’s not an ideal space for a dedicated home theater given all the windows (too much light) and the high ceiling (not good for acoustics) and the open floor plan (poor light control *and* acoustics), but it’s what I got.  (I was seriously tired of looking for a house!) 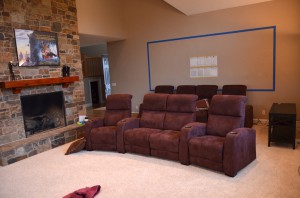 I would have preferred to set up a fixed screen on the one wall (like in my condo before) because I think it looks nice for a dedicated home theater space, it’s cheaper/simpler and it’s easier to add masking.  Unfortunately in this room the only wall that could take a screen is also exposed to both direct and indirect sunlight which would quickly damage the screen material.  Plus the furniture would then be exposed to longer stretches of sunlight.  So I decided to go with a powered, tensioned, retractable screen on the opposite wall.  Keeps the screen safe when not in use (which is most of the time), keeps the furniture mostly out of the sun, orients things towards the view out the window and probably makes people more comfortable to be able to make a more subtle exit out the “rear” towards the bathroom rather than in front of the screen. 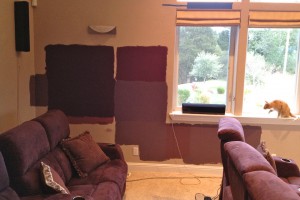 I really wanted to have the ceiling redone with wood planking and beams.  I thought this cathedral ceiling and the stone fireplace would look fantastic that way and I spent a couple of months looking for contractors but all the bids showed that it would be really expensive to do post-construction like this.  After dragging out this decision for a long time, I finally decided to just paint the ceiling darker.  I can always come back and revisit that later, I suppose.

It’s great to darken all the surfaces in a dedicated home theater space because this cuts back on light from the projected image on the screen getting reflected back on the screen.  It makes a huge difference in image quality and “pop” as I discovered when I did the same last time, in my condo.  So I spent a great deal of time looking for a color I’d like and I went through trying many samples on the wall.  I was never entirely happy with the color I settled on last time, so I spent even more time trying colors this time around.

I went with a new projector, the JVC DLA-RS55.  It’s a bit of beast but it does have great image quality, particularly in dynamic range, and it also features a new ability to produce a 4K, quadrupled resolution image from normal high definition sources.  Starting with HD video of 1920×1080, it uses a bit of trickery (what JVC calls e-shift) to upscale this and project at 3840 x 2160.  It’s also capable of displaying 3D movies.  But, aside from image quality, the feature I was most looking forward to was motorized lens zooming and shifting with stored memories.  The goal was to be able to maximize the display of movies with different aspect ratios.  In other words, to be able to display super-wide movies in all their glory!

To that end, I was definitely going to get a 2.4 x 1 aspect ratio screen.  (Normal widescreen TVs are just 1.77 x 1 and old school TV broadcasts, before HD, were 1.33 x 1.)  I did a bunch of tests on the wall and ended up deciding on a five foot tall image being comfortable at the first row seating distance of about 14 feet back.  (Second row will be about 21 feet.)  So, a full super-widescreen movie will be 12 feet wide.  Beautiful!

I ordered a bunch of samples of various screen materials from Da-Lite and Stewart and spent lots of time testing and comparing again.  (Just like last time!)  There are lots of differences in materials and plenty of tradeoffs but I ended up going with the Stewart UltraMatte 130, to get that 30% gain given the size of the screen, my particular projector and the distance back. 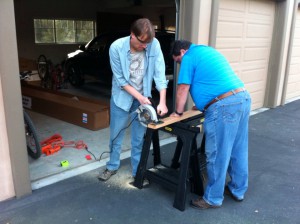 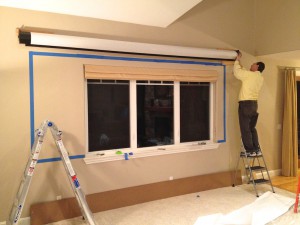 Many thanks to Clay and Dave for helping me hang the screen!  Extra thanks to Clay for coming back a couple of days later to rehang it after I decided that it would look better if it cleared the window sill. 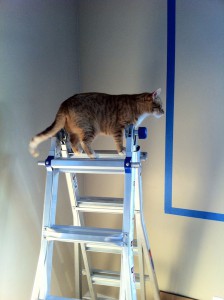 So after hanging the screen, I needed an electrician to wire in power for it and I wanted help with hiding the speaker wire in the walls.  I didn’t have experience drilling through wall base plates and such so I found and hired someone.  The electrician did a great clean, careful job on the screen wiring but the other guy was in such a mad rush the whole time that he made a bit of a mess of things.  And actually, the wire routing is still somewhat visible even after the wall spackling and final painting.  Lame.

So yes, after getting the wiring in, finally time to paint!  Would’ve done it myself except I wasn’t too keen on dealing with the 24 foot high ceiling and scaffolding and all.  Ended up going with a dark but cheerful eggplant color that I really like and a slightly different color for the ceiling.  Though it’s actually hard to tell that the ceiling is a different color — and I’m still kind of wishing for that wood planking and beaming — but it looks pretty nice! 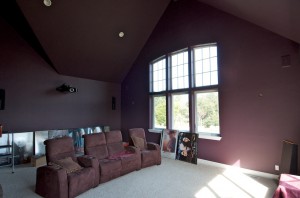 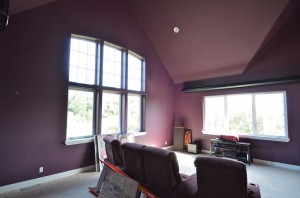 Now of course with those big windows, I need blinds or drapes or something.  I decided to go with some powered shades since it would be a bit of a hassle to close seven separate blinds manually.  I was a little disappointed in the limited color choices on the blackout variety of the Hunter Douglas Duets but I settled on a sort of cranberry/plum as a best fit.  It’s great that these blinds can be installed with battery power instead of having to hard-wire them and they are remote-controlled but unfortunately they use a combination of radio and infrared so it’s not possible to control them from my Harmony One programmable remote.

Next up… building the floor riser for the rear row of seats.  I thought this would go smoother/faster since this is the second time I’ve done it, but I managed to make a few mistakes along the way anyway.  Oh well, came out great nonetheless: 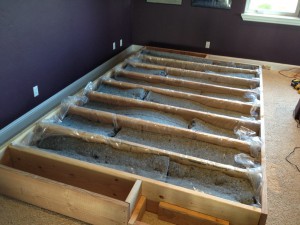 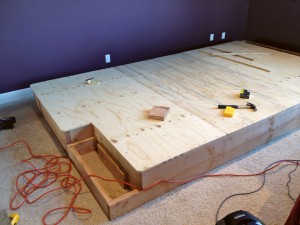 Okay, carpet!  The carpet came out both a little lighter and warmer than I intended, but that’s okay. 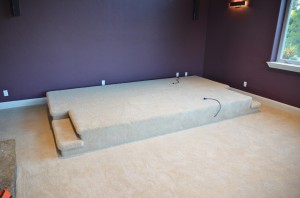 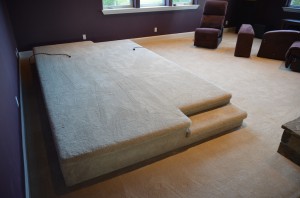 Then moving my old home theater furniture into place… plus the one extra “special” seat.  When I realized I’d have room for more seating, I went to find and order a matching seat but discovered that even though Palliser still makes this particular style of chairs (Sequelle), they no longer carried this particular fabric color (“Monarch Cabernet”).  It’s a kind of plum/wine color.  So I had to order it in a different color.  So now there’s a special purple chair!  Luckily I could place it in a middle position so it doesn’t look quite so out-of-place.

A few new movie posters, a new media center cabinet, four new surround  speakers, new wall sconces… we’re getting there!  I’ve wired up the lights and the power for the equipment and the reclining chairs with Insteon, so that’s all remote-controlled and the lights are programmed to fade in/out nicely. 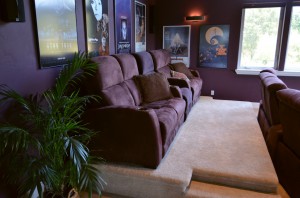 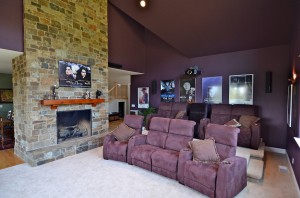 What’s left now is I need drapes to be able to close off this room from the dining room and the entryway when desired.  Particularly in the afternoon and evening, the sun sets in such a way that it streams in from the other side of the house.  Makes for a lovely view of sunsets everyday but not so keen if you’re wanting to watch the big screen.

July of 2012: The partition curtains are hung.  Looks great.  Who’s up for a movie night? 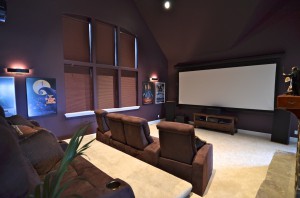 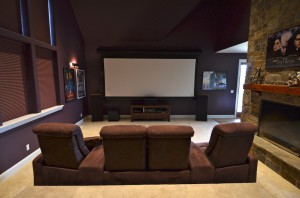 I think I may have some acoustic issues though.  Even with the furniture, carpet, curtains and posters, I think I’m hearing a fair bit of slap echo that can make dialogue a bit harder to hear.  I suppose I need to put in some acoustic treatment — probably on those opposing sloping ceilings.  (Update: six years later, I’ve yet to address it.  Maybe someday!) 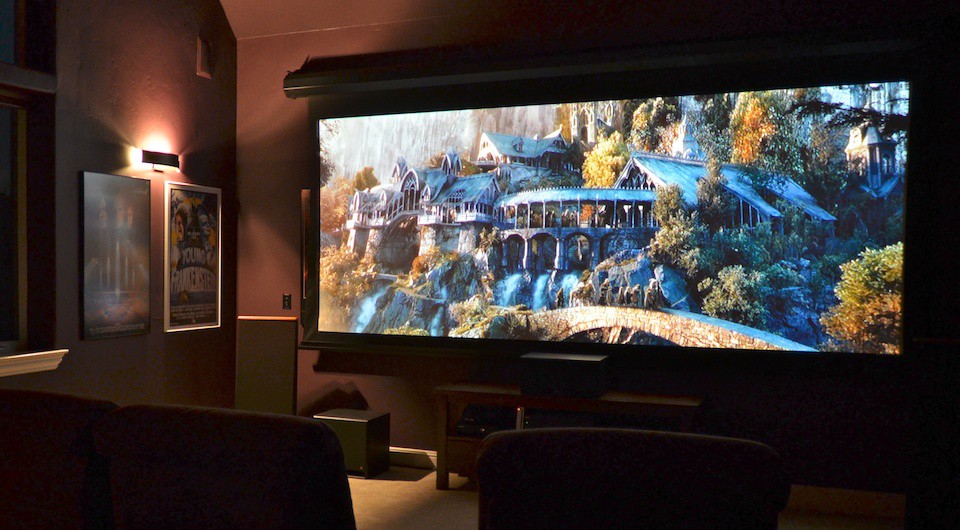