“Have you played Atari today?”

A little while ago, after reading “Ready Player One” again (Spielberg is making a movie!) and after seeing a couple of tech talks by old Atari game programmers, I was lamenting that I sold my old Atari VCS so many years ago.  Well, Darlene jumped on this comment, found a bundle someone was selling on eBay and surprised me with an early birthday gift.  Yup, an old Atari VCS/2600 (four switch version), a set of controllers and a bundle of game cartridges. Sweet!  (I think my brother and I actually had the six-switch, Sears-rebranded version, but still very cool!) Thanks, Darlene!

I immediately had to go fill out the set of 40 cartridges with a couple of other games I remember us playing a lot.  Of course then was the challenge of hooking it up: the Atari outputs an analog RF TV signal… on an RCA-plug cable.  You can use an adapter like this one to go from RCA plug to coax TV cable input.  I don’t have a TV tuner, so rather than pulling a VCR out of a box in a closet, I hooked it up via my old USB EyeTV tuner/video converter to my MacBook – success! 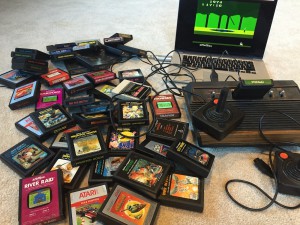 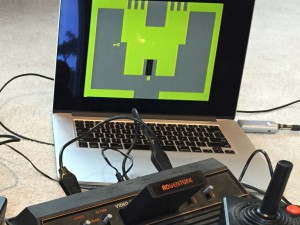 Yeah, you can play any of these games via emulation on a modern computer, or even a smartphone/iPad, but there’s something very different about jamming the physical cartridge into the old physical console and handling that classic Atari joystick.  (And having to use cotton swabs and alcohol to clean the contacts on all of the Activision cartridges to get them to work again!)

It’s been fun to pick these up and rediscover old visual/procedural memories, like the admittedly-simple path through the Adventure maze.  Some titles are only vaguely familiar until you plug them in and see the game again and then go “aha!!”

So… to paraphrase Atari’s old marketing… have you played your Atari today?