Alright, that does it.  Enough “surprises”.  After several mice in various states of disrepair, a bunch of live but tail-less lizards, a not-quite-dead gopher this morning and a most definitely dead and disemboweled mouse, gopher or rodent of some sort tonight… that’s it.  I’ve had enough.  No more pet door, guys — no more free in-and-out access.  Perhaps you’ll eventually deplete whatever remains in the fenced-in area but you’ll have to do it with controlled access from me.

Oh, you want back in?  Not with that lizard you’re carrying, Pan.

Perhaps after many months like this (not being able to bring prey inside) they’ll lose this habit – or at least drive off all the prey.

They seem to enjoy the access to the roof though – I installed a pet door in the upstairs bathroom window instead. And there’s an upstairs patio area off of the master bedroom where I’ve put in some potted plants and grasses for them. 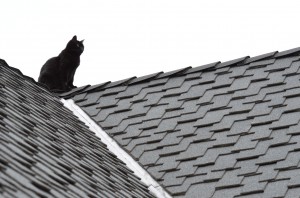 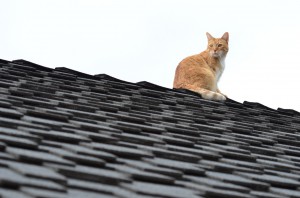