The One That Got Away (Almost)

Waking up early this morning, prepping to go ride Wilder with MBOSC, I wonder “where’s Pan?” as it’s odd for him not to be curled up with me in bed.  So I go downstairs and find him easily enough: 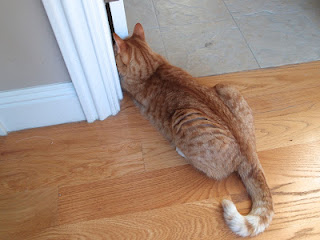 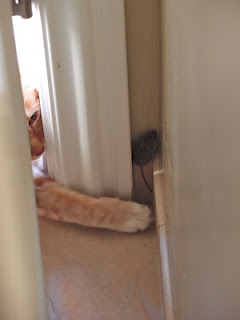 It appears he’s been terrorizing another tiny little field mouse all morning (or night).  From his body language, purr and greeting to me, it’s clear in his mind he’s “playing” with a toy.  “Look what I got!”  I doubt the mouse sees it that way.

Do you really have to bring them inside though, Pan?!  Some days he brings in one lizard after another and I keep tossing them out back, scolding him while I do it.  The amusing thing is that Pan gets all pissy with me and talks back – clearly upset that I don’t appreciate all his effort spent to bring them home.

Well, it turned out to be easy enough to lure this little guy into a shoebox and toss him to safety — after showing Pan what I was doing.  Get the idea, Pan?  NOT in the house! 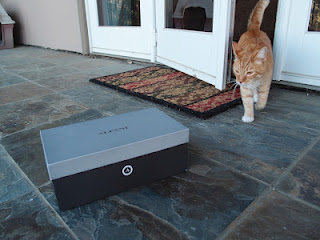 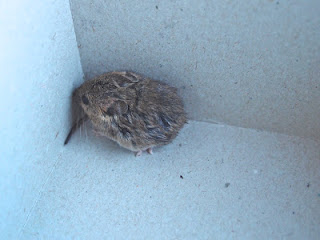 Follow-up: The very next morning I awoke to the sound of kitty excitement in my bedroom. It would seem that *somebody* recaptured that little guy and brought him/her to my bedroom (argh!) and which point Hera took over to make a meal of him. Lovely. Leaving entrails when they were both done. Wonderful.

Unless the mice and lizards learn not to venture into the fenced area, I don’t think my current “open pet door policy” is going to last. Although I will say Pan seemed at least a little concerned over what my reaction was going to be when I first realized what was going on. Or, more likely, he was just expecting praise.