Not a Happy Bat 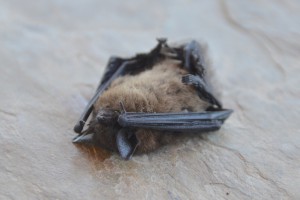 This little guy was not having a good day.  Presumably one of my cats caught him last night.  I saw his tiny dark form on the porch last night when I let Pan and Hera in, but I assumed it was the remains of another mouse for me to clean up later.

I was surprised in the morning to discover it was a little bat and that he was still alive — squirming occasionally on his back.  I got some cardboard to turn him over and he shrieked a bit but still laid there.  He clearly wasn’t feeling too great.  Rather than let Pan and Hera mess with him,  I decided to carry him into the front yard.  He squealed a bit and started hissing and showing his teeth.  That explains why Pan gave his little form such a wide berth coming in last night — I thought it odd at the time.

Anyway, I carried him into the front yard where the cats couldn’t get him, but of course there are plenty of birds….  And yeah, just an hour or so later I saw several large birds around where I had left him and went over to find him curled up, no longer moving and… covered in ants.  Yeah, wasn’t a good day for the bat.