I’ve just added Dolby Atmos support to my home theater by upgrading my receiver and my Blu-Ray player and by adding a pair of vertically firing speakers.  I decided to go with the Onkyo TX-RZ3100 which provides for 11 audio channels at 140W/channel, giving me 7.2.2 in my new speaker configuration (seven = three front + two side + two rear, two subwoofers, and now two down-firing).  For sources, I now have an UltraHD-capable Sony UBP-X800 Blu-Ray player and the newest AppleTV.  All of this also means I’m ready for 4K/HDR if/when I eventually upgrade my projector.

The additional speakers are a pair of Klipsch RP-140SA add-on speakers that I can simply set on top of my two front subwoofers. They’re naturally angled to fire upwards and bounce off the ceiling and back down to the listening area.  I didn’t want to have to go to the trouble to mount downward-firing speakers on my very high, vaulted ceilings so these were a very easy and convenient solution.  They’re not really meant to be used for a vaulted ceiling, but they seem to be working well enough.  I certainly seem to get a nice reproduction of Dolby Atmos movie soundtracks. 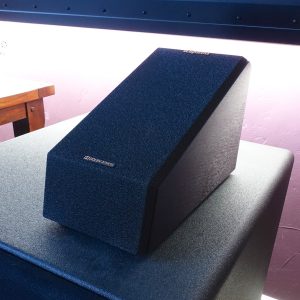 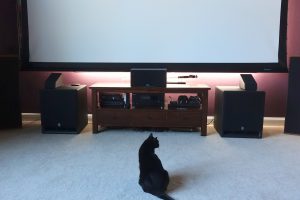 So how does it sound?  Well, I definitely like it and I definitely think it was worth the cost and effort.  As much as I liked my existing 7.1 surround sound system, this new object-based, spatially-encoded audio is quite impressive in the movies that make use of it.  It certainly sounds much better than the old channel-based surround sound.  It’s amazing how much more the sound seems to be coming from directions where your speakers aren’t!  I say go for it – particularly if you’re planning to upgrade your components to support 4K/HDR anyway!