I’ve been trying out a new pair of sunglasses with a built-in video/photo camera, the Pivothead Recon.  The Recon (actually now called the Kudu) is one of several styles of camera glasses from Pivothead.  The glasses can record video at 1080/30 or 720/60 fps as well as take still photos (up to 8 MB).  They can even capture stills while you’re recording video.  They have interchangeable shades, including the photo-chromatic kind (adjusts to brightness).

The camera functionality works pretty well except that they currently have some issues with their various focus modes.  The continuous focus mode hunts for focus a lot, the fixed focus mode is set to a focus point that’s too close so most of the time everything is very softly focused, but I’m getting the best results with the auto-focus mode which sets a focus when you start recording and holds that for the duration of the recording.

The exposure isn’t always ideal but then it’s pretty amazing that they can cram all this functionality in a sunglasses frame (rather than having a bulky camera mounted on your helmet).  Another issue though is that the little LED lights on the inside of the frame aren’t really visible while you’re wearing them so you have to pull them half off to verify that they’re on and/or recording.  Given that a) you can’t start recording until a couple of seconds after you hit the power button and b) they automatically shut off when idle after 30 seconds or so, it’s easy to think you’ve started recording, when you haven’t.  (This keeps happening to me.)  It would be better if the little rocker switch to start/stop a video or take a photo would actually power them up, rather than having a separate power toggle button. 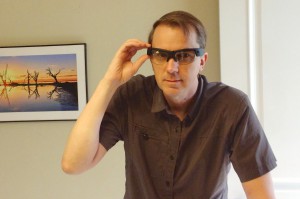 The glasses aren’t very adjustable for different faces.  Mine tend to sit high on my nose and the camera points up a little high but this ends up working out to a good angle for mountain biking.  Yes, that picture was taken using the glasses, but I titled my head down (and still heavily cropped it to frame it well).  Without doing that, the center of the shot would actually be well above my head.  But as I say, that has to do with individual fit and it works out fine for me while on a bike.

The Pivothead charges via USB and you can get a combination external battery pack and WiFi hub (Pivothead Air Sync) that allows you to charge it up and download your shots when you’re out in the field.  It’s also useful as extra power for any USB-chargeable device.

Here’s some sample video showing some of its strengths and weaknesses.  (Also, this video was shot with these glasses as well.)  Both videos have of course been downsized and compressed for web presentation:

Note the challenges in dark, high contrast lighting in the trees and how quickly (or slowly) it can adjust to changing lighting.  Obviously it does much better in brightly lit scenes.  Also, it would be awesome to have some optical stabilization but that would be asking a lot at this point, particularly in the frame of a pair of sunglasses.  Really I just hope they can fix the other focus modes and improve the start/stop method.