First Launch of the Falcon Heavy

On Tuesday, February 6th, SpaceX successfully launched their Falcon Heavy rocket on its inaugural flight, sending Elon Musk’s original Tesla Roadster and “StarMan” on a far reaching orbit around the sun as a test payload.  Happily, I was able to fly out to Florida and experience the launch firsthand from the Kennedy Space Center’s closest available viewing location for the general public – just 3.9 miles away from the launch platform!  (It’s just too bad they haven’t removed the historic-but-no-longer-needed launch tower at LC-39A, as it was sitting between us and the Falcon Heavy.)  Still, it was quite the show with essentially three of their Falcon 9’s strapped together and all twenty-seven engines firing simultaneously!  Not to mention the amazing, never-seen-before, simultaneous return of the two outer boosters back to the nearby landing zone!

I’ve made a video of what it was like to watch (and hear) from our vantage point: 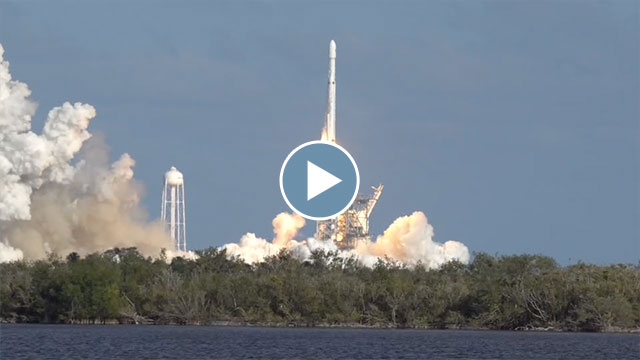 This viewing location is part of Kennedy Space Center’s “Feel the Heat” ticket package which takes you to the Apollo/Saturn V Center to view a launch and includes a buffet, some commemorative items, and return entrance to the Kennedy Space Center on a later date to enjoy the rest of the exhibits.

You’re given an assigned arrival time some 5-6 hours before the launch to catch your bus (and told not to come earlier) but for this historic event, there were so many people that it took hours to get through the security gates, boarded on a bus (really? loading the buses serially??) and delivered to the viewing area.  By the time we unloaded from the buses at the viewing area, there was slim-pickings for anywhere on the grounds to set up a tripod with a good, unobstructed view because apparently many folks had shown up an hour or more earlier.  Anyway, I staked out a spot between others some three hours before the scheduled launch but had to skip the buffet to keep watch over all my gear. 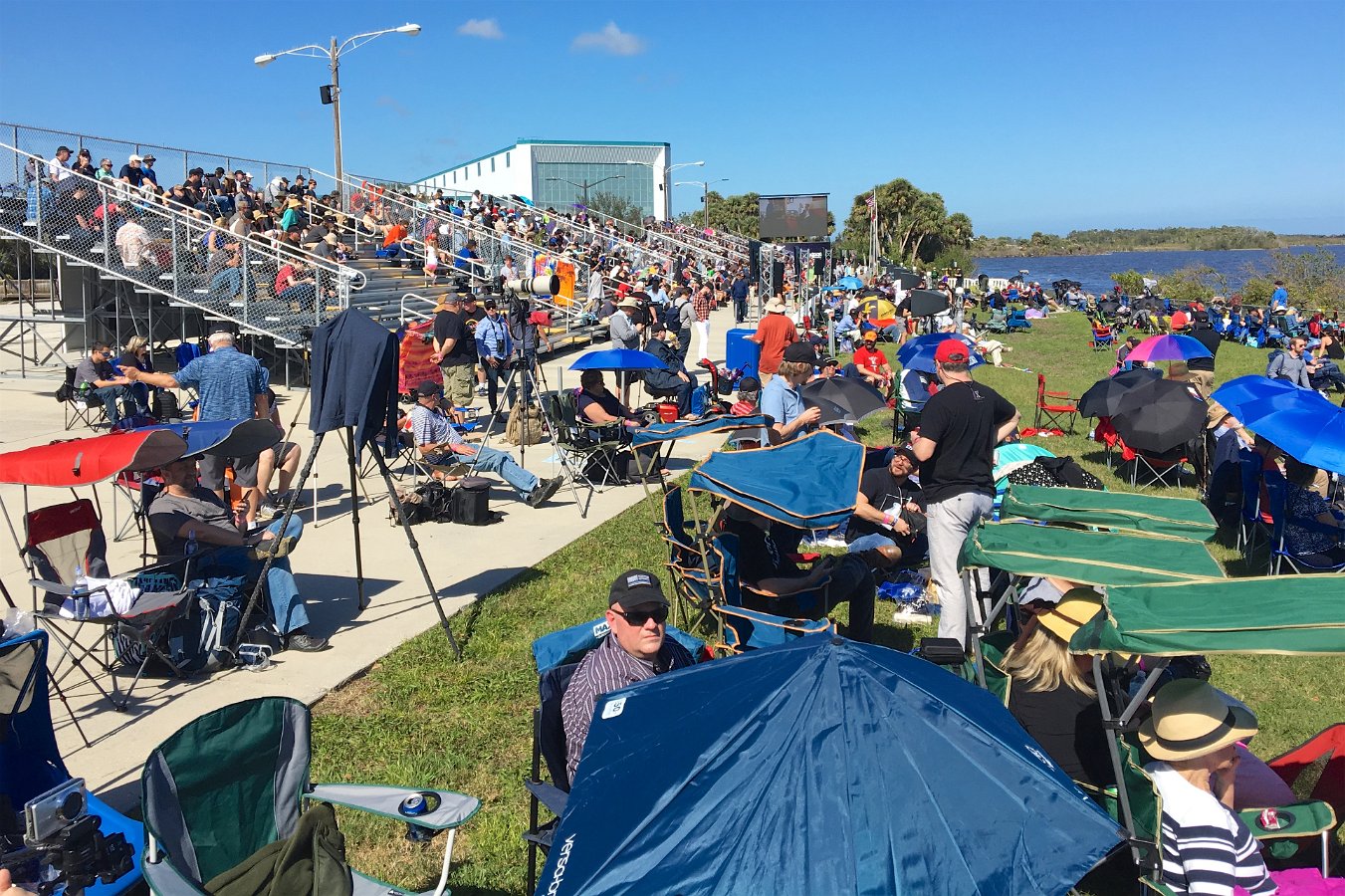 The launch ended up being delayed several times due to high altitude wind shear and we were all getting a little nervous that they’d miss their launch window for the day (1:30 pm – 4 pm) as they rescheduled all the way up to 3:45 pm.  But then, about an hour before that, they made the call to go ahead and start fueling the liquid oxygen – meaning a go for launch!  Hurrah!

And then 5, 4, 3, 2, 1, …. and great clouds of steam erupted with 27 engines firing – quite the sight!  We couldn’t see the rocket until it cleared that annoying (and unneeded!) tower, but afterwards the light intensity of the exhaust was incredible as it climbed into the sky.  You hardly notice the absence of sound from the rocket with the cheers of the crowd around you, but a few seconds later it starts to come across – and it’s an amazing, stuttering roar. 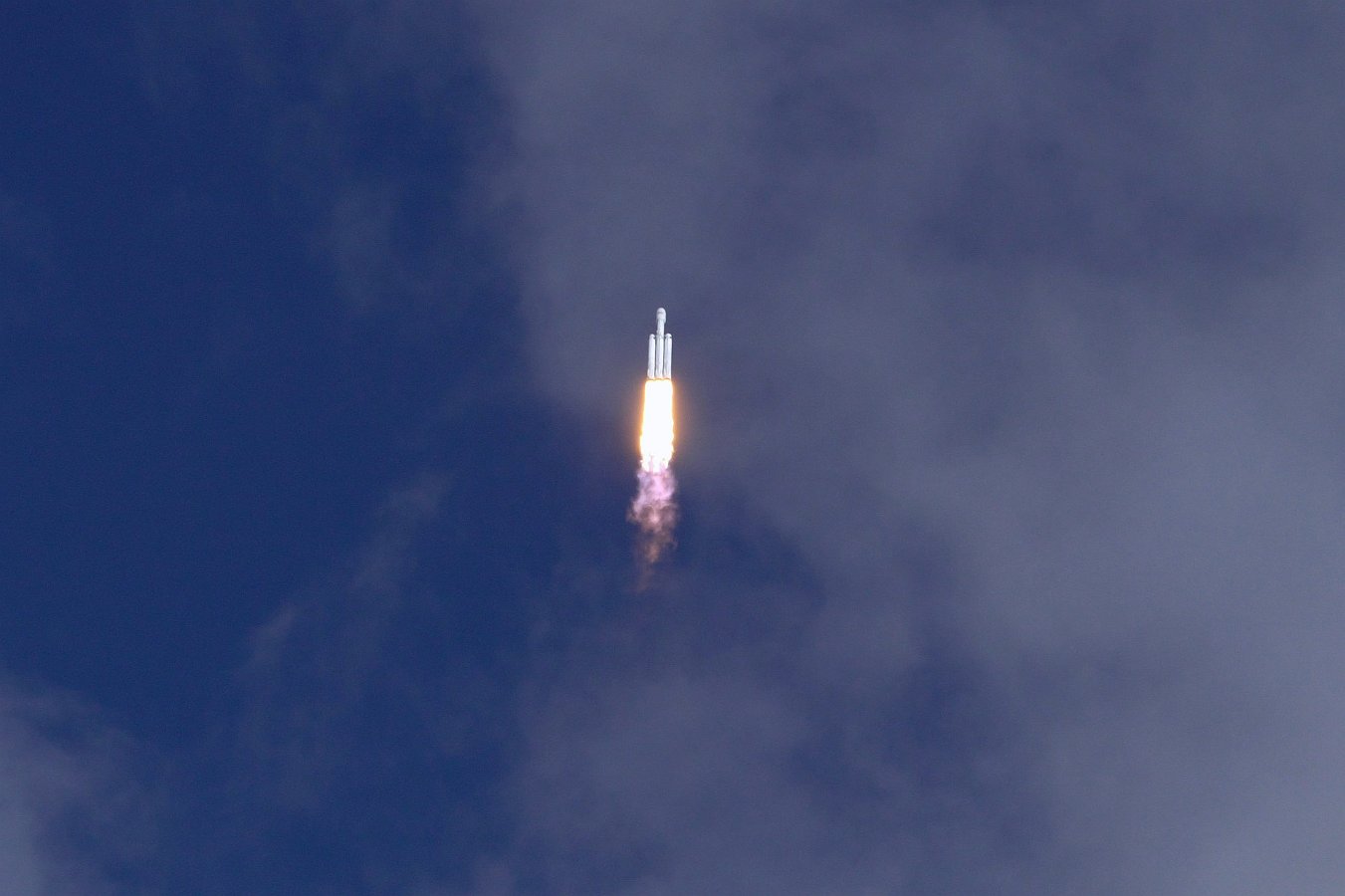 Then you get to watch it climb and roll and, higher up, begin to build a beautiful column of vapor – which it eventually disappeared into.  After a bit, it reappeared further east as a faint set of exhaust plumes still coursing away.  On the monitor, we could watch and hear announcements of each successful milestone and cheers would erupt each time – like with the separation of the side boosters and their retro-firing to return to Cape Canaveral.

Minutes later the two side boosters appeared in our sky coming down at incredible speed.  We all lost track of them though when they cut their engines again and unfortunately many of us weren’t in a position to see them again when they reignited for their final deceleration over their landing targets. We could of course see the video feed on the monitors, perfectly landing themselves (vertically!), like something out of science fiction – but it wasn’t until after they had landed that their twin sonic booms reached us.  We all of course learned later that the center core didn’t fare so well because two of the three needed engines were unable to restart (not enough ignition fuel) and it crashed into the ocean close enough and hard enough to damage the autonomous drone ship that was waiting for it.  But hey, this was a test flight!

The Falcon Heavy is now the most powerful rocket in the world, with the most lifting capability – though it will soon be surpassed by NASA’s upcoming “SLS” rocket as well as SpaceX’s own future “BFR”. 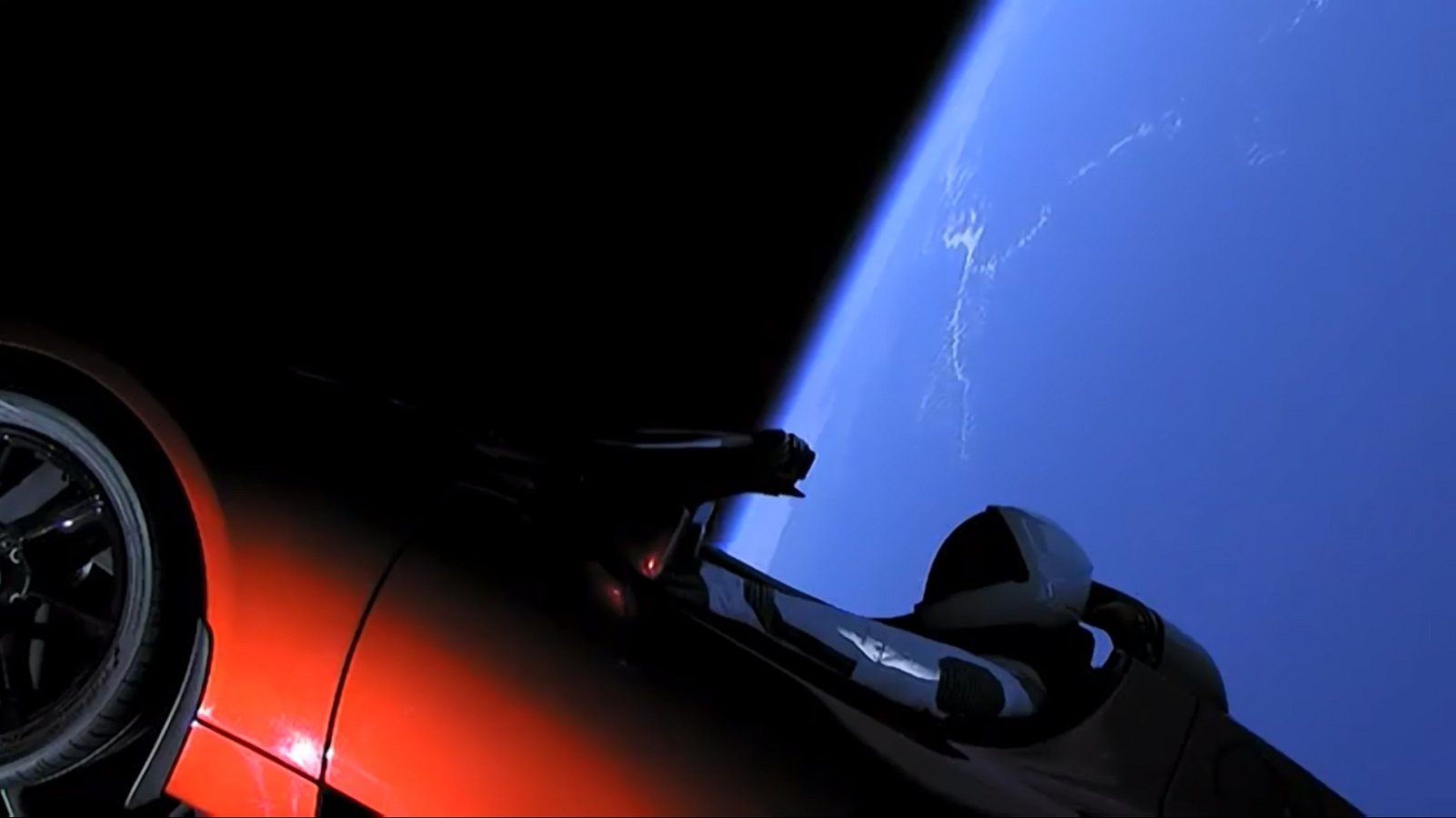 Click through for my full photo gallery from the launch and my follow-up visit to the Kennedy Space Center:

Here are links to more videos of the first Falcon Heavy launch: