I had promised Darlene a substitute backpacking trip when we found out she would no longer be able to go on our upcoming backpacking trip in Washington state.  We were able to take four days over the Labor Day weekend and I picked out a promising area that I hadn’t been to north of Lake Thomas A. Edison that would give Darlene another taste of the High Sierra.

We took off Saturday afternoon amid some unusual high temps as well as heavy smoke that had blown down from numerous wildfires in Oregon and Northern California.  It was a five and a half hour drive to get to the trailhead, including an interesting drive over a very rough, one lane road from Huntington Lake that goes over Kaiser Pass at 9184 feet.  We found a spot to camp along the road near the High Sierra Ranger Station on Saturday night and to wait to get a wilderness pass in the morning. 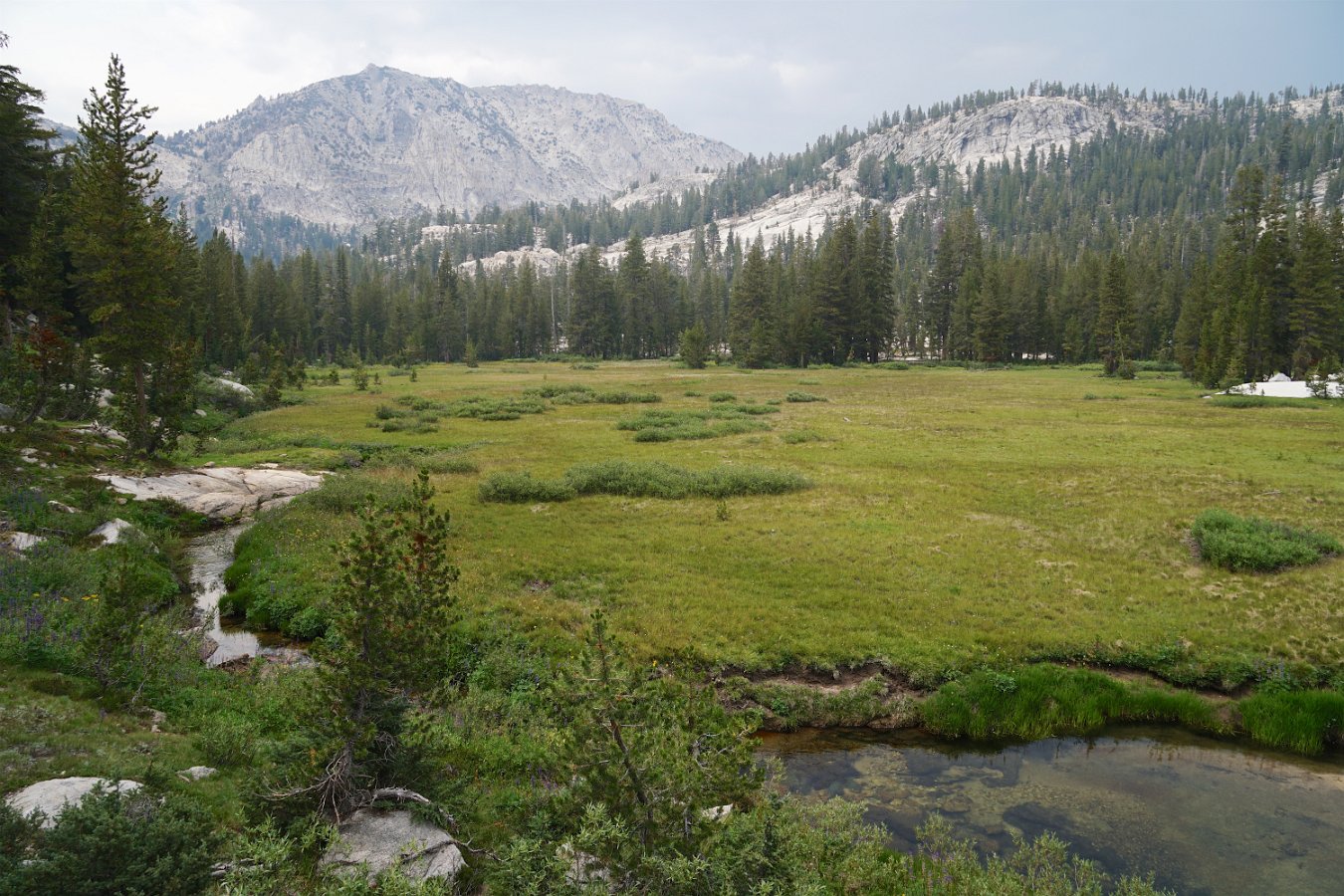 A meadow along Silver Pass Creek

We had our pick of numerous trailheads near Lake Edison but settled on doing a loop up and over part of the Silver Divide by following the John Muir Trail / Pacific Crest Trail over Silver Pass and then returning via Goodale Pass.  (View map.)  The smoke from the distant fires was still pretty heavy and worrisome on Sunday morning but we managed to just barely catch the backpacker’s ferry boat across Lake Edison and that cut out four miles of hiking our way around the reservoir to get started.  From the ferry landing (7643 ft), it’s about nine miles to the top of Silver Pass (10,900 ft). 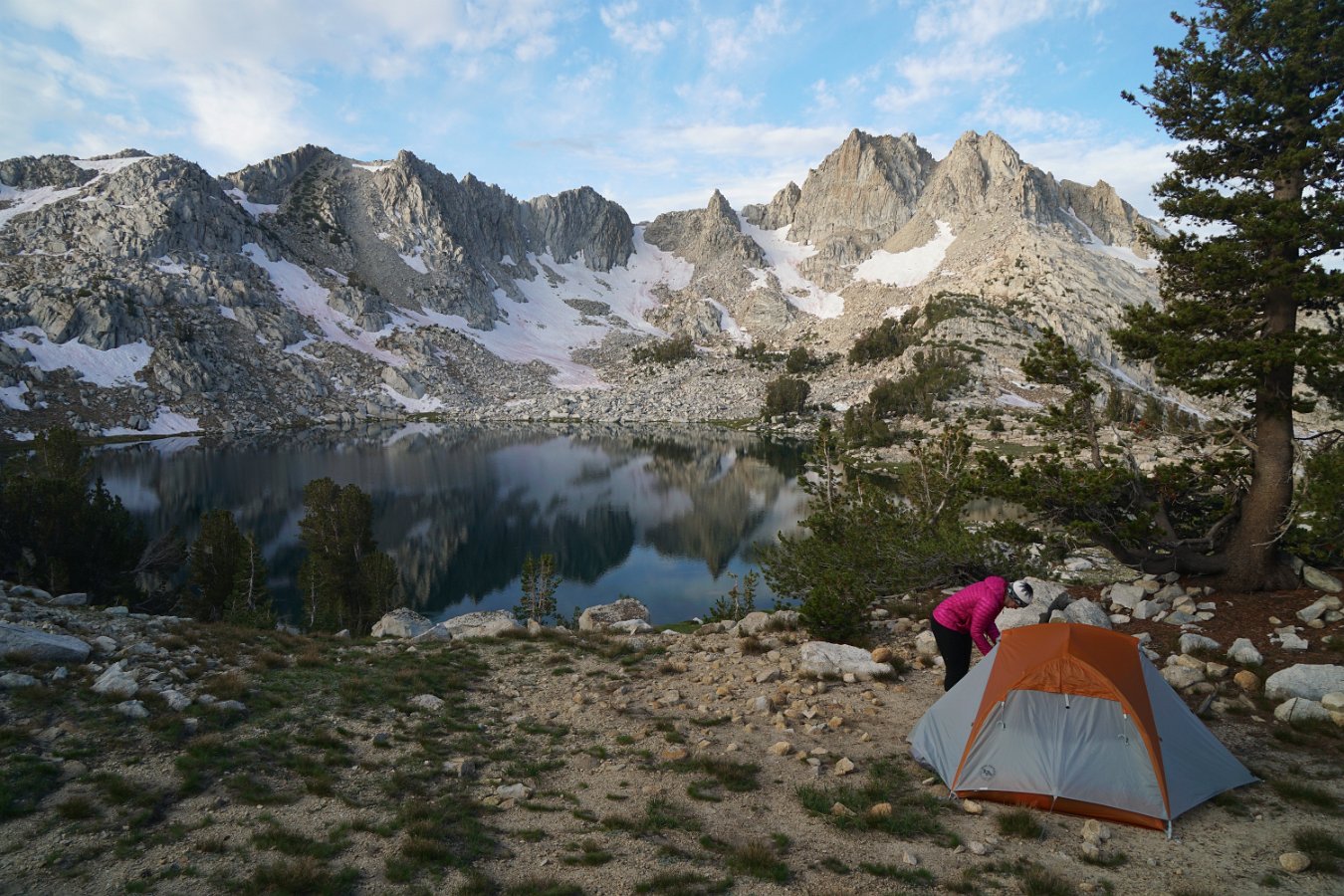 There’s lots of small, alpine lakes scattered along the divide and we found a lovely spot to spend two nights overlooking Chief Lake just below Silver Pass at about 10,400 ft.  Thankfully the smoke wasn’t too bad at altitude and it mostly cleared out overnight with the winds and occasional brief showers.  Not much to see in the way of stars though with a very bright full moon on display. 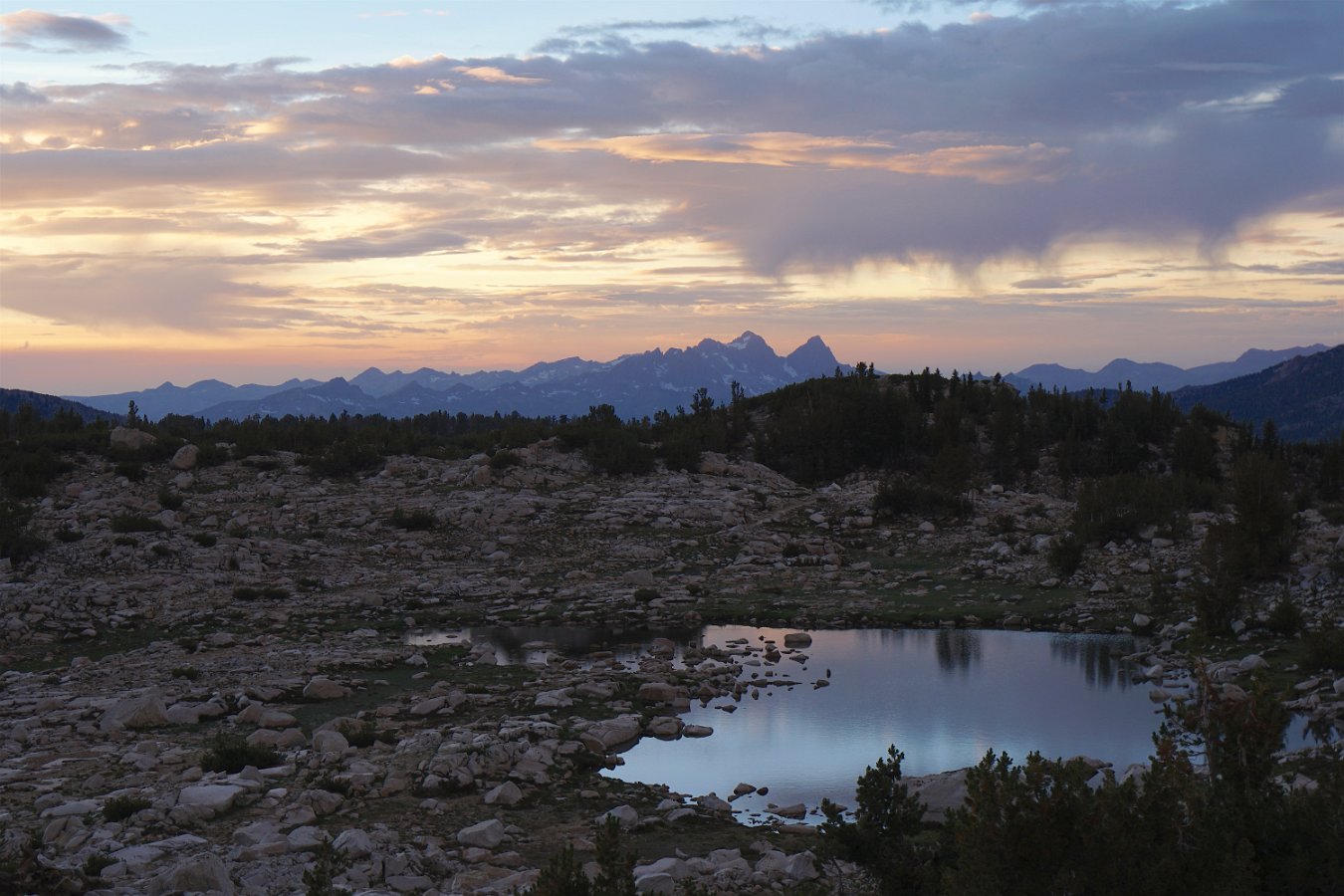 Sunset skies over the distant Minarets to the north

In the morning, we were treated to views of the distant Minarets (part of the Ritter Range) up near Mammoth.  There were a good deal of mosquitos in the morning and evening but not as much as I had feared given our really wet winter this year.  The weather alternated between periods of sunshine and heavy clouds with brief sprinkling while we ventured up a nearby ridge on the Silver Divide to get some more stupendous views of our surroundings. 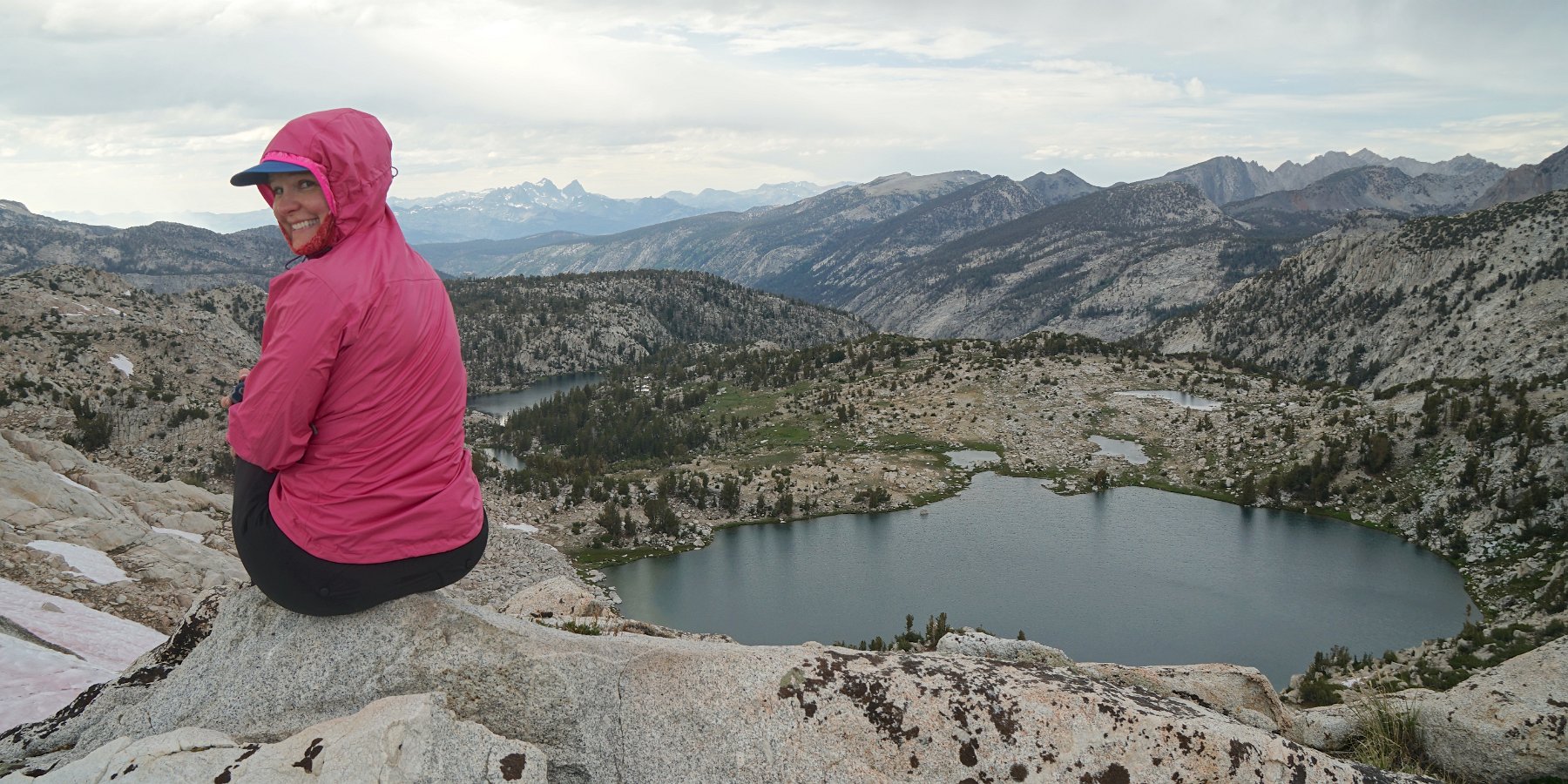 Enjoying the panorama perched on a ridge above Silver Pass

Monday night was tough to sleep through as we had hours of heavy gusting winds but eventually it quieted down.  Our return journey on Tuesday was about 12 miles over Goodale Pass (10,997 ft) down to the Vermillion Resort on Lake Edison.  However, it was clear my boots were not going to make it – the soles were completely disintegrating.  They’re probably also why I lost my footing and ended up crashing into a creek when I attempted to push off one rock to leap to another.  I ended up using my shoelaces to tie the soles to the bottom of my shoes and keep them from coming completely separated before reaching the end of the trail.  I might need some new boots now though. 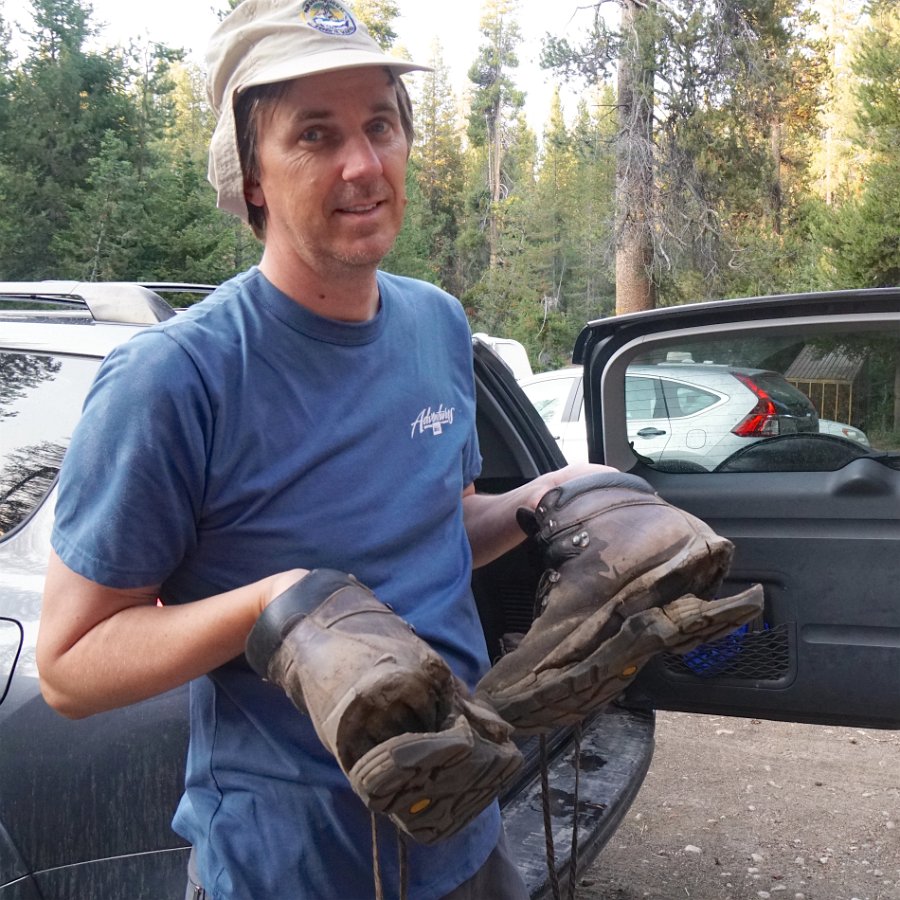 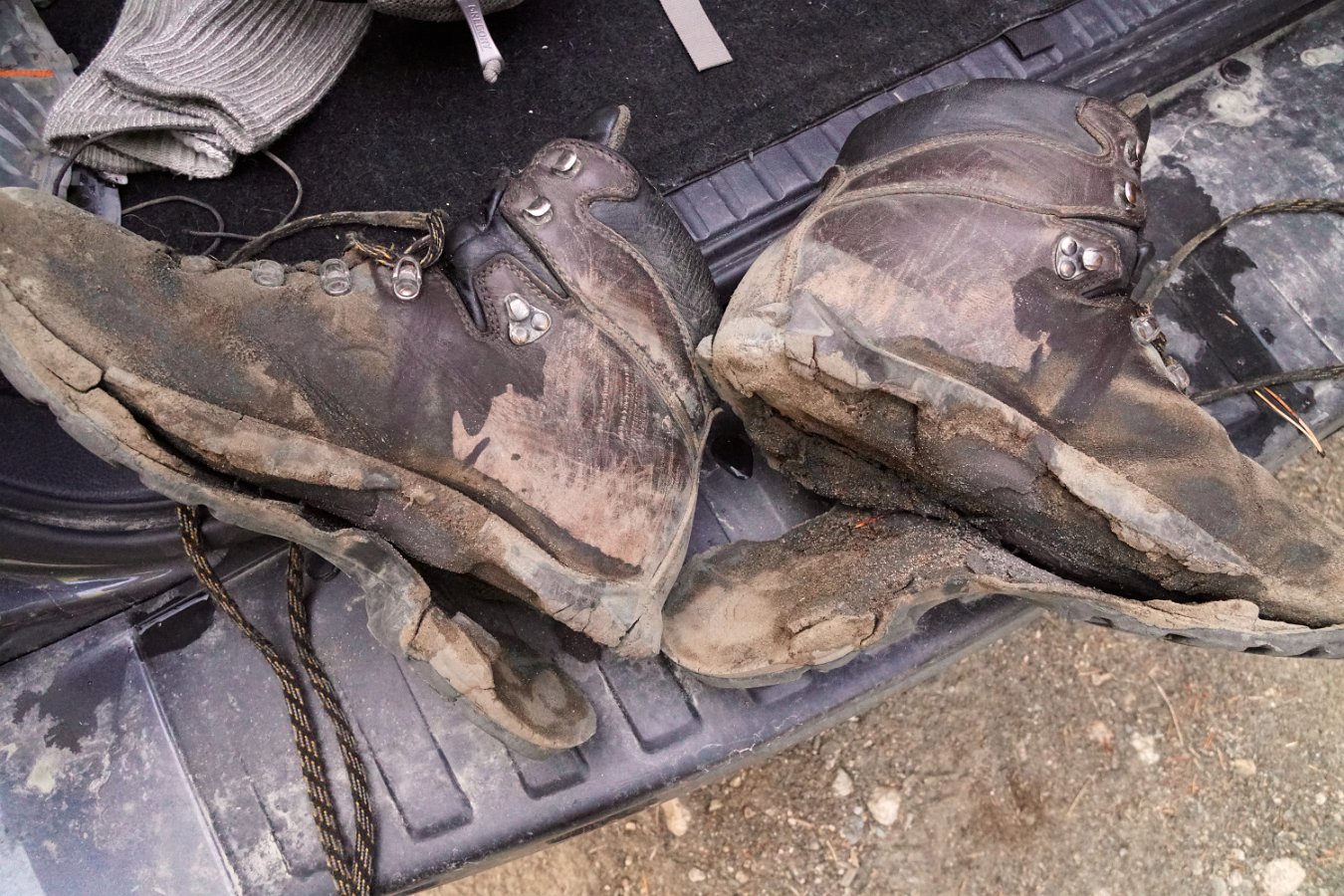