As an add-on for our trip to Chile’s Atacama Desert, we all wanted to be sure to get to see the amazing Uyuni Salt Flats in nearby Bolivia.  As it worked out, we were able to join up with BikeHike’s trial run of their new Bolivia adventure trip by taking a guided, three-day, 4×4 road trip from Chile over the Altiplano to the Uyuni Salt Flats in Bolivia.  Darlene was also able to finagle a little additional time off from work to join us on this portion of Glenn and Michele’s Most Excellent Adventure™.

Click through for the full gallery of photos and videos from the trip. 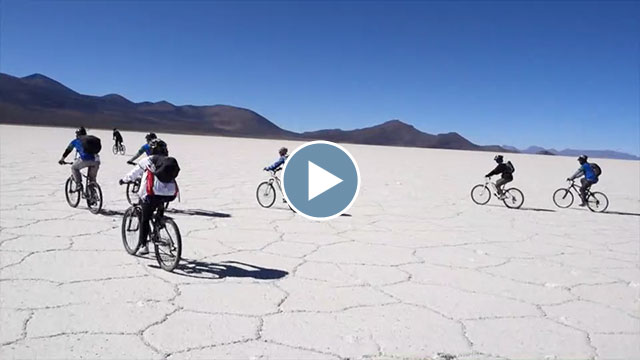 Across the Altiplano: Glenn, Michele and I started out in San Pedro de Atacama, Chile, and were driven up to the Altiplano and dropped off at the tiny, remote little border control building on the southwest Chilean/Bolivian border.  After successfully negotiating Michele and Glenn’s Bolivian visas (mostly about producing absolutely pristine US dollars for the visa fee), we were loaded into the apparently defacto standard Altiplano vehicle: a Toyota 4×4 Land Cruiser.  Over the next couple of days, we navigated a maze of dirt roads in the high altitude (15,000 ft) visiting a series of color-coded lagoons (red, green, white, etc) and a few miscellaneous sights and landmarks.  We overnighted in both a hotel made of stone and one made of salt and got to try our hand at herding llamas to pasture as well as trying to fire a slingshot without injuring ourselves.  We also spent the better part of two days criss-crossing the Uyuni Salt Flats and they proved to be as vast and amazing to behold as suggested in the photographs we’d seen before. 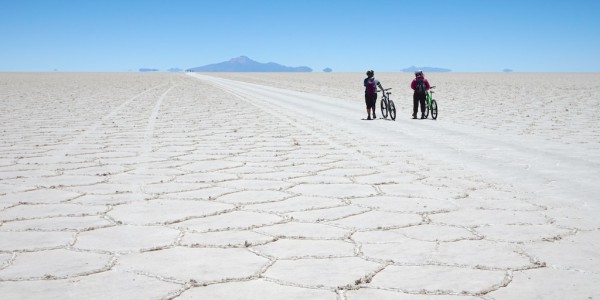 More of the Uyuni Salt Flats: After this initial introduction to Bolivia, we were deposited in the town of Uyuni in time to join Darlene and the rest of the BikeHike group flying in from La Paz.  Over the next couple of days, we would explore much of the area on bikes, starting with a tour of the mining ghost town of Pulcayo.  We biked back down to Uyuni, mostly following the route of the old mining railroad bed.  We biked across a few chunks of the salt flats itself – which proved quite daunting due to the vast, unchanging scenery.  We stayed overnight in a more rudimentary building made of salt on the slopes of the volcano Tunupa and enjoyed a ride out for sunset and stargazing on the salt flats.  On our second day, we visited a cave containing desiccated mummies and continued on to the island of Incahuasi, in the middle of the flats and home to hundreds of cacti. 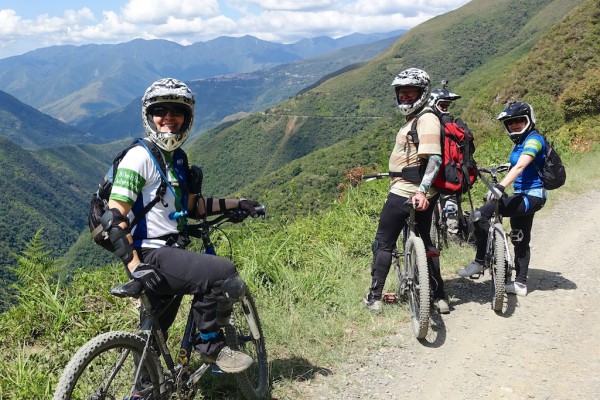 “Death Road” Ride: Upon our return to La Paz, we had an early start to go ride mountain bikes down along Bolivia’s infamous “world’s most dangerous road”.  They’ve since built a new, modern, paved highway to bypass the route but it was once very treacherous for being a dirt road cut into very steep mountainsides and forcing buses and other large vehicles to try to squeak by each other.  This route now makes for a gorgeous and easy downhill bike ride packed full of wonderful mountain vistas.  Unfortunately, we had to do the ride with one of several large tour groups and so you have to do things on their terms.  You’re forced to keep to a schedule that at times is pushing you forward (despite the desire to stop and enjoy the stupendous views) or making you wait (for organized photo portrait stops, despite the fact that everyone has cameras of their own, or while the staff clean and prep the bikes at the end of the ride, etc).  Amusingly, you’re also required to wear full downhill racing body armor and full face helmets despite a route that consists of first a paved highway and then a well-used dirt road and a gentle downhill slope.  Actually, the full face helmet was dangerous for how much it limited your ability to see around you.  I suspect the armor is both to drum up the “Death Road” adventure marketing as well as for insurance purposes – not that body armor would do you much good if you managed to ride off a several hundred-meter precipice!  Anyway, I think this excursion would be a lot more fun with your own group, going at your own pace and with normal biking gear. 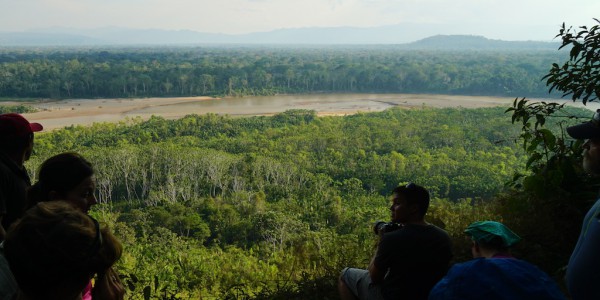 Amazon Jungle and Grassland: After La Paz, we were on to the Amazon jungle, starting with a river boat cruise to our jungle lodge in Madidi National Park. Along the way, we stopped off at a farm where among other things they grow sugar cane.  We were able to put a little labor into squeezing out a bucket of sugar cane juice for everyone to sample, with a touch of lime.  From our jungle lodge, we set out to hike to our overnight campsite, near a macaw nesting area.  Besides lots of spiders and ants, our guides were able to scare up a  pack of wild boar.  I was a little anxious about overnighting in the Amazon as I’m very not keen on large creepy-crawlies and have already had my share in other tropical rainforests.  As it turns out, at least this part of the Amazon was no more intense in terms of bugs and it was fine.  I do wish we could have spent a more leisurely time moving through the jungle though and seeing and learning about the rainforest (as I have enjoyed on other such hikes), instead of in the apparent rush we often seemed to be in.  I wasn’t even really able to pause to take any decent pictures along the trail.  We did enjoy a leisurely return trip to the lodge, floating down the river in the afternoon rain on a log raft constructed on the beach.  That night we went for a short jungle walk to see what we could find after dark. 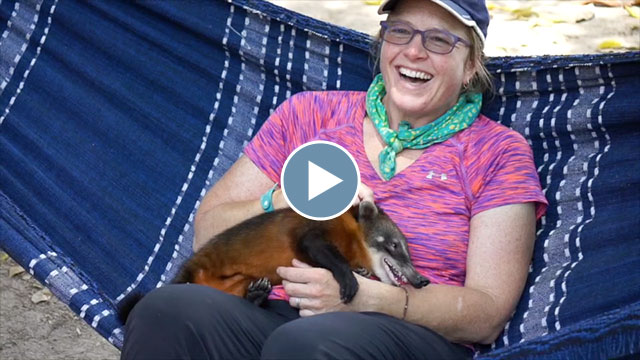 The following day saw us return to town by river boat and then take an extended drive to get to a second lodge in the swampy  grasslands of Pampas del Yacuma.  First we were greeted by not-so-friendly caiman and turtles but then by a super-friendly and ever-curious coati at the lodge.  We ventured out again on a pair of boats to follow the river and see the many birds, caiman and capybara along the river… before the skies opened up for serious afternoon downpour.  (At least our boat didn’t pussyfoot it back to the lodge to get any silly rain gear.)  That night Glenn and I went out again with our guides Ishmael and Jorgen to see all the creepy eyes of the caiman reflecting back at us in the dark.  Plus we managed to catch several Amazon trout by expertly letting them leap into our boat.  On our fourth and last Amazon day, we went hiking in a plantation to hoot at howler monkeys in the trees and to catch meat-hungry piranha by the river side.  The tricky part seemed to be removing the hook from the menacing jaws of those little fish.

An alpine view near Mount Condoriri

Our Last Day: After returning to the cool, high altitude of La Paz from the Amazon basin, we enjoyed a home-cooked meal at the home of a local resident while Glenn kept careful watch over a clearly demonically-possessed children’s doll. On our last day, Michele suggested a hiking destination for us all in the Andes: the glacier-laced Mount Condoriri.  The drive out there proved adventurous in itself, including trying to find a suitable box lunch among the raw meats and stacks of junk food in the street-side market.  We ended up hiking to an alpine lake at the base of the mountain and it proved to be a nice finish to a great little trip.

Recommendations: Our 4×4 excursion from San Pedro de Atacama over to the Uyuni Salt Flats was not particularly exceptional and I have no reason to recommend them (actually it seemed our driver was more knowledgeable and trying harder than our English-speaking guide).  For the rest of the trip, the BikeHike tour of Bolivia including the Uyuni Salt Flats and the Amazon jungle, this trip was very enjoyable despite being their trial run to shake out the “bugs” and find improvements to be made.  Definitely worth checking out.  But I want to call out special attention to Ishmael and the folks at Mashaquipe EcoTours for their splendid staff and lodges in the Bolivian Amazon basin as well as their efforts to benefit local indigenous families.  Lastly, thanks again to Trish and Jorgen for helping us (me, Darlene, Glenn and Michele) enjoy another great adventure!

Click through for the full gallery of photos and videos from our trip.

Michele has also posted several stories and pictures from the trip on her blog: