These are photos and videos from a twelve-day trip to northern Vietnam and northwest Cambodia from April 23rd to May 5th, 2013 with Darlene, organized and booked through BikeHike Adventures.

Our trip began with some sightseeing in Hanoi including a traditional water puppet show, experiencing the packed city streets and the crazy driving habits.  We also visited the Ho Chi Minh Mausoleum, The Enthology Museum and One Pillar Pagoda before catching the night train to Lao Cai. 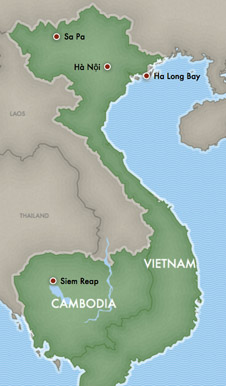 We arrived in Lo Cai on the night train from Hanoi and drove an hour to our hotel in Sapa. The Sa Pa district is populated with eight ethnic tribal minorities: including the Black Hmong and Red Dzao.  Our first day was spent on trail bikes and our second day on foot following roads and paths through and around terraced rice fields and small villages. We also visited the Ta Phin cave.  Our second night was at the lovely and secluded Topas Eco Lodge, overlooking the Sapa Valley.

Unfortunately, I wasn’t aware or prepared for what to expect in the Sa Pa region and how much these mountain villages have become a tourist trap/destination. Everyday large numbers of tourists follow the roads connecting these villages and everyday a similarly large number of village women come out to meet them and follow them for most of the day in the hopes of selling some of their homemade craft (clothing, blankets, etc).  I appreciate their effort to supplement their income and make the most of the tourist trade, but it does get sorely tiring to spend each day being constantly plied with requests to “be their friend” and “buy from them”.Days 6-8: Islands of Halong Bay

After returning from Lao Cai via the night train, we had breakfast in Hanoi before setting off for the coast and Halong (Ha Long) Bay. We stopped along the way at one of several large government sponsored craft stores and factories (employing war victims). We boarded a luxury Indochina junk (a traditional Vietnamese boat) to cruise amongst the thousands of towering limestone islands in Halong Bay.

Our first stop was at a very crowded beach and overlook but later we were able to enjoy some more peaceful kayaking, swimming and exploring. The trip also included an evening paddle around a floating fishing village. Unfortunately our three day cruise was cut short after the first night due to an impending storm and we had to return to the mainland, but we were at least lucky to be able to get a hotel reservation. We spent our extra time on the third day visiting some more sights on the return trip to Hanoi and to catch our flight to Cambodia.

We arrived in Siem Reap the night before and started our adventure in Cambodia the next morning by heading out to Beng Mealea.  Along the way, we stopped to visit an active temple-monastery and meet a Buddhist monk.  Beng Mealea was easily one of my favorite temples because it has been left in much the state it was found, partial ruins overgrown with tree roots and being taken over by the jungle.

After this, we headed much further out to visit various sites of Jayavaram’s 10th century capital of Koh Ker.  We got to camp out overnight next to the step pyramid of Prasat Thom and continued our sightseeing of Koh Ker the next morning before returning to modern Siem Reap for a respite from the sun in the hotel river pool.  That afternoon we went to the dark pink stoned temple of Banteay Srei.  In the evening, we enjoyed dinner and a traditional folk dance show back in Siem Reap.

Our last full day in Cambodia began with a predawn start to get to the entrance of Angkor Wat by sunrise – with the rest of the huge tourist crowd – and this isn’t even high season!  After the spectacular sunrise, our guide knowingly guided us around Angkor Wat to see the other temples of Angkor while the rest of the crowds lined up to overrun Angkor Wat.  It was a wonderful plan: we got to enjoy the other splendid temples, particularly Ta Prohm, in relative solitude.  We also visited the walled city of Angkor Thom and the splendid temple of Bayon where each of its 54 towers are capped with four massive stone face sculptures.  After another midday break from the sun, we finally returned in the late afternoon to slip in and tour Angkor Wat before its closing.

At sunset, we visited a street market on the outskirts of Siem Reap where our guide demonstrated the enjoyment of some insect delicacies!  (Yuck!)  On the following morning of our departure, we visited a workshop and saw a large variety of crafts, including the sculpting of stone works used in restoration projects.