We got to try out my new gear earlier this week: a collapsible, convertible kayak from Advanced Elements.  It’s the AdvancedFrame Convertible model and it’s an inflatable 15 ft. kayak that converts from single to double and from open to closed deck.  Most importantly, it fits in your trunk!  No need to haul it on top of your vehicle (or in a trailer) to your destination!  It packs down into a bag 36″ by 21″ by 11″ and 56 lbs.  I’m particularly psyched about the idea of bringing it on road trips, like to the Sierras, and having it available as an option to pull out whenever or wherever we might choose.

This is an inflatable kayak with aluminum structural elements in the bow and stern and it’s very quick and easy to set up or take down. (Like 15 minutes or less.)  It’s designed with a tough outer skin around an inflatable frame consisting of two inner chambers and has a couple of rigid fins and a skegg to help it track a straight line well.  There are a number of optional extras to customize it, including single and double closed deck tops. 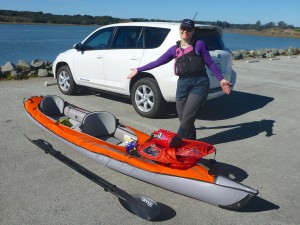 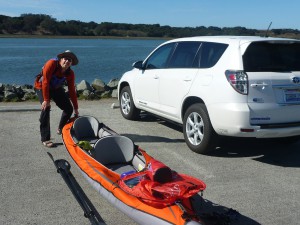 Darlene and I tried it out this Tuesday at the Elkhorn Slough, launching from Kirby Park.  We set it up in open deck form and tried out the optional, high pressure drop stitch floor which provides more rigidity than the standard floor.  There’s also an optional, aluminum “Back Bone” pole that can be placed under the standard floor that gives the kayak a more pronounced V shape underwater.  We’ll be trying that configuration later. 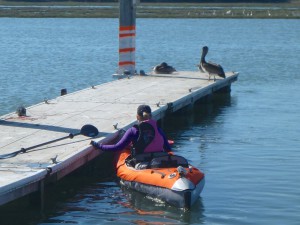 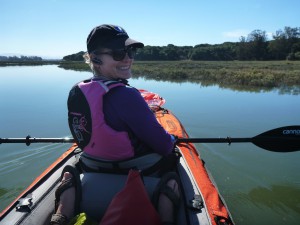 It performed great.  It felt very stable, moved quickly and tracked straight lines easily.  It felt very much like a normal sit inside sea kayak.  There’s plenty of room for the two of us plus some gear.  (And I’m 6’4″, 195 lbs.)

After Darlene finished her meeting (calling in while we were out on the water), we tried out the sail attachment.  This particular sail is from Advanced Elements as well and is designed to clip into the front buckles on the kayak and hold its form without intervention, leaving your hands free to paddle.  This worked well and the big transparent panels on the sail made it still easy to see where we were going: 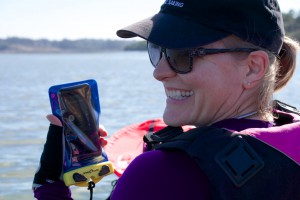 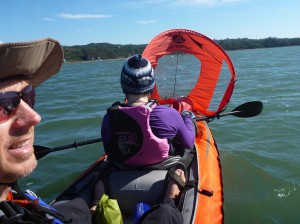 And, of course the big advantage is being able to quickly collapse the whole thing down and tuck it into a small space in your vehicle… with or without the help of passing pelicans: 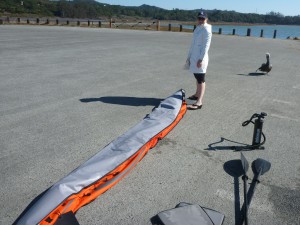 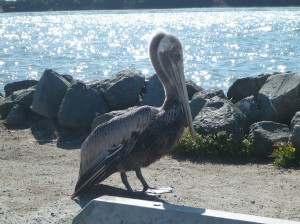 I took it out again the next day, but this time I configured it for one person, placing the seat in the middle space and installing the optional covered deck.  (There’s also a covered deck for the two person configuration.)  The single person deck has a hatch behind the seat to provide access to storage area and both the single and double decks have inflatable rims that allow you to attach a spray skirt. 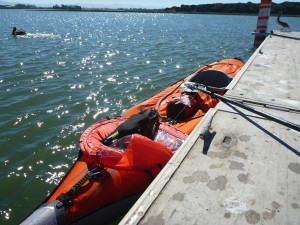 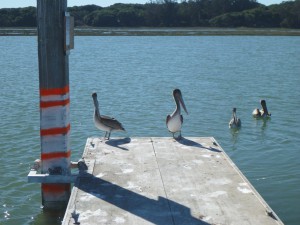 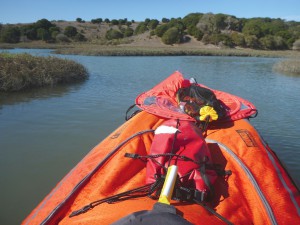 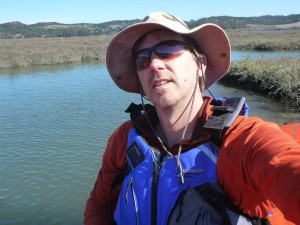 The kayak still handled very well with just one person.  Next time though I’ll be using the optional, adjustable foot rests.  This wasn’t necessary in the two person configuration, at least for me in the back, because of the inflatable thwart behind the front seat position.

So there it is, the AdvancedFrame Convertible, providing a compact one or two person kayak tucked into the trunk of your car!  If you’re looking for more reviews, take a look at paddling.net or Amazon.  Check out AirKayaks.com if you’re interested because they provide some nice bundle deals and make the extra effort to provide nice demonstration videos on many of the products they sell. 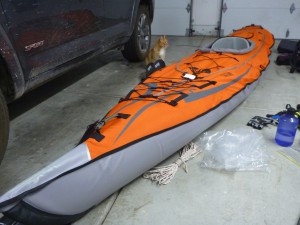 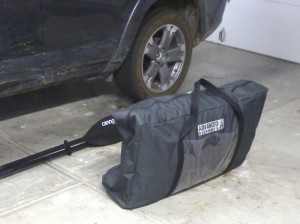 It looks like Pan and Hera might want to join me on my next excursion in the kayak: 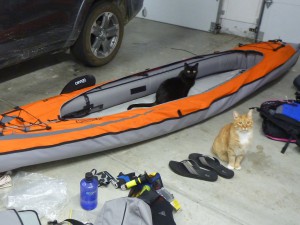 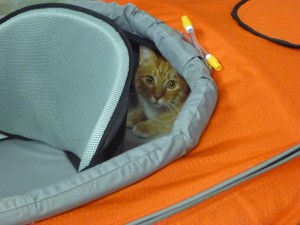 How did you find getting in an out of the two person, for the first person in and the second?

Great review, and awesome job calling in from the water!

Getting in and out isn’t really any more of a challenge than a typical kayak, except perhaps that there’s less vertical space between the floor and the optional deck when using the thicker, optional rigid floor. Also I am 6’4″, so it’s always a bit of challenge to get my legs into any kayak!