For Darlene’s birthday last week (mid-April), I took her on a ski trip to a surprise destination: Banff, in the Canadian Rockies!  We stayed for five nights and skied at Sunshine Village and Lake Louise. We also spent a little time exploring the national park: hiking in Johnston Canyon to see the ice falls, up to Lake Louise to walk out on the mostly frozen lake and out to Lake Minnewanka.  We were super lucky to decide to go revisit Lake Minnewanka after dinner on our first night because not only were the skies clear but the aurora borealis made a pretty good showing that night.  It also happened to be the first time either of us had ever seen an aurora in person! 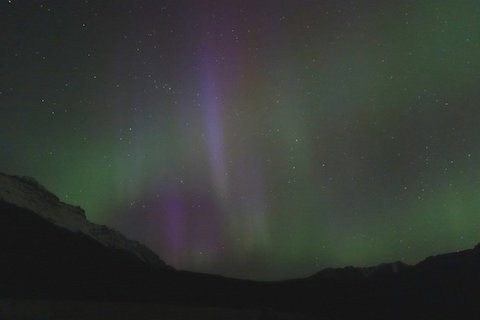 Click through to see the full gallery and video montage:

I was worried about the snow conditions when we arrived because there was no hint of snow in the valley around Banff (and the previous times I was there in the winter there was tons of snow everywhere). There wasn’t even any snow on the drive up to Sunshine on our first day. However, Sunshine is actually up pretty high and you take a gondola to get to the runs from the parking area. And, even before the weekend snow, it was great conditions and good coverage.

We went to the lower elevation resort at Lake Louise after the storm came through and I’m glad we waited because there were plenty of clues of how nasty and frozen the snow was on some parts of the mountain underneath the new snow. It definitely gets warmer there than in Sunshine. This was mid-April of course.

Compared to Whistler/Blackcomb, Sunshine (Banff) and Lake Louise certainly have a better chance of snow and cold weather, but they’re not as convenient. Sunshine is like 15 minutes from Banff and Lake Louise like 40 minutes or so. You don’t have to drive as there are free shuttles (with resort passes) to/from Banff and the drives are very pleasant. And there are other things to see and do if people want to take a day or two off from skiing. 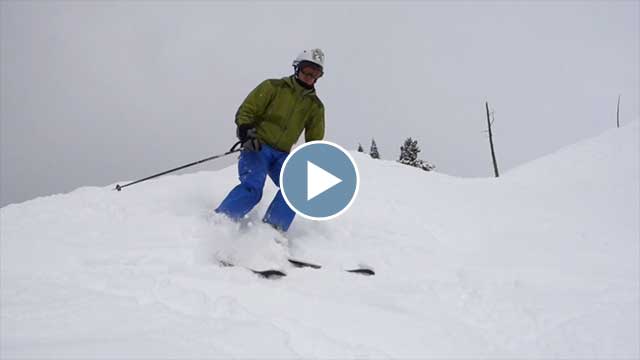 Short video montage of our trip.

Sunshine and Lake Louise are both fairly large resorts, with plenty of terrain to explore. Their trail ranking is pretty strange at both resorts: lots of green runs and black diamond runs which would be rated blues in Tahoe. At times it seemed pretty arbitrary how the runs were ranked. You had to just go and check it out. You couldn’t trust the ranking at all. (Didn’t try any of the double-blacks: just assumed they were super steep chutes.)

One negative is that Sunshine has a few large portions (maybe a third) of completely open terrain above the tree line. Not only are these areas open to a storm but they also don’t let you feel like you have anything to explore in those areas. It’s just one big open expanse that feels the same all over, rather than many runs to check out. This certainly isn’t true all over the park, it’s just a couple chunks of it. Also a couple of sections of their acreage are special, restricted areas where you have to partner up and carry avalanche gear.

Similarly, as big as Lake Louise is, most of the backside terrain is double-black diamond: presumably chutes which Darlene and I didn’t try. But there are lots of other fun blue and black runs. Unfortunately, we found our favorite run after lifts closed on our last day!! D’oh!

I think it would be easy to enjoy five days skiing between the two resorts. There’s also little Mt. Norquay but we didn’t bother. It looks much smaller than Sugar Bowl (here in California) and I like Sugar Bowl.