I’ve been happily riding my old Santa Cruz Superlight since I got it way back in 2001.  I’ve never been too interested in keeping up with all the yearly new bike tech and I get pretty bored with all the bike talk at many ride meetups.  (nerp derp berp)  I just like to ride on da trails!  So I had yet to try tubeless or Propedal or dropper seats or any new geometries and shocks.  I didn’t even get around to disc brakes until like 2010 – and I had to get new hubs and wheels to do it.  However, somehow the most recent batch of talk about new bikes among friends and other riders finally got me to go try a demo of something a little more… modern.

With a little bit of research, the Santa Cruz Blur TR Carbon caught my interest and I even managed to find an XL available for demo — not the easiest size to find anywhere!  This is their recent “Trail” version of the Blur introduced last year as something between the Blur XC and Blur LT.  Here’s a great video explanation of why Santa Cruz made this bike.  So I took it out on some very familiar trails in Wilder Ranch yesterday….

Wow, what a freakin’ difference!!  Feels like removing some handicaps… or like pressing the easy/fun button!  I noticed tons of things compared to my 11 year old Superlight: I had much more power pedaling climbs and even flats, presumably to the different geometry that puts me more over the pedals and probably to some degree with the newer shock technology. I was surprised by this because I never really felt my climbing ability was being limited by the bike. I found I could climb up many sections much more easily and even climbed up some things that usually give me much trouble on my old bike. The steering is also much quicker and more nimble. That took me by surprise in the parking lot but was really useful on the trails too.

Over the course of my ride I found myself easily rolling up over abrupt step-up obstacles that previously were a nuisance. And of course I found the drops down much more comfortable too. Even just over this first ride, I was already taking some lines and obstacles and at least one down section that I would normally always avoid — that’s how quickly I gained new confidence with the bike.  Clearly this has a lot to do with its more modern shock technology and how it compares to my old XC-oriented bike

I’ve never been one for steep descents or super-technical stuff and I’ll sometimes get into trouble going too slow out of fear of lack of control.  I’m most happy on just windy, rolling, swooping single track and the occasional minor rock garden or exposed root.  However I do end up on more challenging stuff following friends, like on Tahoe’s Hole in the Ground trail last week, but I’m pretty cautious and end up walking through the scary bits.  So I think this bike might even actually be a safer ride for me because of how more forgiving the bike feels and how I’ll be better able to roll through stuff.  It also feels like it allows me to better recover from mistakes and bad split-second choices. There was at least one instance where I mistakenly did something that I think would have felt like a near endo on my old bike but *didn’t* feel like that on this one.

The upshot of all this is I’m definitely getting a new bike now!  ;-)  And it’ll be probably this one, but I’m going to go try something else tomorrow for comparison. Only negative with this one is the low bottom bracket — I did strike a pedal a couple of times even while being aware to be careful of this. Oh, and some uncomfortable handlebar grips — but I think I can fix that. ;-)

So, rider beware!! Don’t go demo a new bike unless you want to end up spending a bunch of money you didn’t intend to — particularly if you have an old bike like I do!

So I tried the Blur LT for comparison today.  Thought it would be interesting to try something very similar but with long travel design.  And this time I was surprised by how much it wasn’t the same at all.  It didn’t feel as easy or fast to climb (same trails, btw) nor even very comfortable for me descending.  I totally lost that confidence I had gained with the TR version.  It’s clear that the Blur TR has a very different, more stable riding position — something that I really like.

I was thinking to go try a 29″er but now I’m not going to bother.  After this experience of comparing the LT to the TR and given what I’ve read of the differences between 26 and 29-inchers, I’m pretty sure that I won’t like the steering as much and won’t feel as comfortable as with the Blur TR.

The 2012 demo bike I rode was on sale but it was pretty beat up, maybe even more so than my 11 year old Superlight so I called around to all the local shops both in Santa Cruz and the south bay and of course I couldn’t find an XL size at all.  Too bad as this is the time to find deals on 2012 leftover stock.  So, it’s a new 2013 Santa Cruz Blur TR Carbon in glossy white on it’s way to me now — should arrive just in time for the Boggs Mountain weekend coming up in two weeks — sweet! 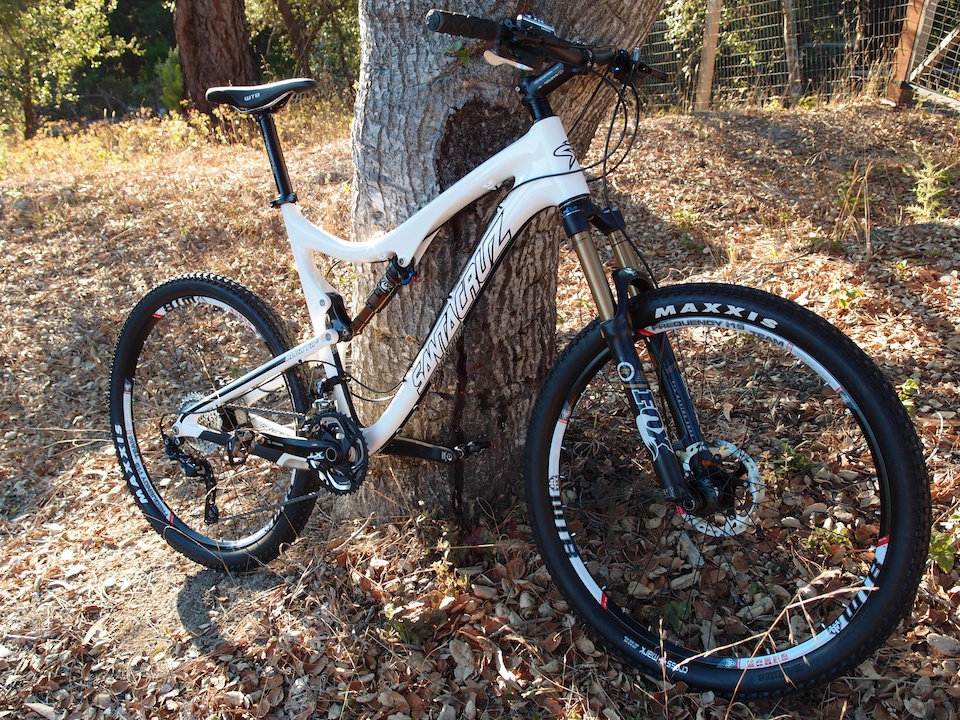